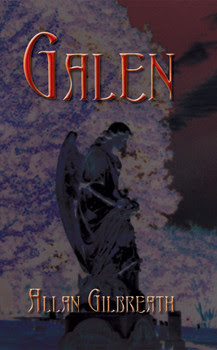 It is no secret, I do not think, to anyone who follows my reviews that I am not the biggest fan of the current books produced by the wave of interest in monsters.  In no way am I a proponent of Zombie fiction, I cough up hairballs at the thought of sexy werewolves, and my blood absolutely runs cold at the thought of sparkling bloodsuckers. So a ‘modern monster’ book is a really hard sell for me.

A writer known by many far and wide for his ability to essentially conquer any genre he takes a swipe at, Gilbreath is also the maniacal mind behind Kerlak Publishing, a publishing house spotlighting many up and coming works and writers of all types, including a name or three familiar to New Pulpsters and others that will be soon enough.  Gilbreath brings his tremendous talent to bear on a trope of fiction. Vampire tales, that many have believed was so tired and exhausted that it required prettying up and repackaging.

Gilbreath did just that, but not by turning vampires into eternal teenagers, but by taking the beast back to its roots in a lot of ways.  ‘Galen’ is the first book in a series about the title character, a vampire.  Almost instantaneously, Galen reminds readers of the gentlemanly vampire, popularized by Bela Lugosi, the regal bearing, the genteel trappings.   But under that refined sophistication lurks something sinister, something single minded, something hungry.  Allan Gilbreath in just a handful of pages reminds his readers that vampires are monsters.  And Galen, in all his complex dealings to live amongst humans and his meticulous planning as well as his description of potential victims as if they were cattle in front of a butcher shop, is most definitely most modern and monstrous.

‘Galen’ follows two stories essentially, of course both tying back into our title character.  One concerns a past feeding of Galen’s and, when he returns to the area several years later, the renewed interest of one of his victim’s friends in the mysterious deaths from before.  The other thread focuses squarely on Galen’s need to feed and who and what he seeks out for dinner.

This book is filled with an eerie pulpiness that many writers don’t even attempt to reach anymore.  It’s not got explosions, ray guns, or many fist fights.  This book is all about pursuit, the hunt, prey and predator.  In that, Gilbreath builds the action at a subtle pace that ends up being breakneck before you know it.  Galen is reprehensible, yet likable.  He is thirsty, yet affable.   He is hunger made human, but you simply can’t get enough of him.

The only technical negative with ‘Galen’ is that the transition between the two threads was a tad wobbly at times, but that can be overlooked largely by the fantastic way that Gilbreath tied them together when it counted.

FOUR OUT OF FIVE TIPS OF THE HAT-Definitely no sparkles here (Although Gilbreath will gladly tell you about how that part of being a Vampire is actually part of the original legends!).  Galen is a flat out monster book with a monster you can’t help but like. And he’d like you too.  With a pinch of salt.