Yep, the gift-giving holidays are upon us once again. Here’s three recent releases that are among the top of my list. 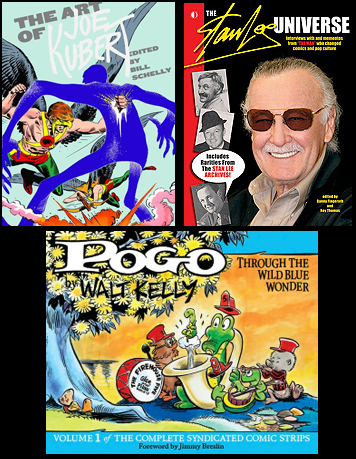 If you’re asking “who’s Stan Lee and why should I care about his universe?” then I’m asking “why are you reading a website called ComicMix?” I’m not going to waste bandwidth establishing Stan’s street cred. The Stan Lee Universe is not the definitive biography of Stan Lee; even at 89 years of age (in three weeks), he’s continuing to create new comics properties and appearing on television shows and in movies and his story remains a work in progress. As a life-long comics fan and practicing professional, I find great comfort in that.

The Stan Lee Universe is a massive gathering of articles, interviews, tributes, and – best of all – items from the Stan Lee Archives from the University of Wyoming’s American Heritage Center. All this stuff was hoisted up and organized by two of the medium’s best, Danny Fingeroth and Roy Thomas, both having served time at Marvel Comics with Mr. Lee and both having an encyclopedic knowledge of the field. The folks at TwoMorrows (Alter-Ego, Write-Now, The Jack Kirby Collector) did the design and layout, and the result is a black-and-white and color extravaganza that actually taught me a thing or two about both Marvel and Stan… and I’ve been here forever.

Danny and Roy knocked themselves out, and it shows. No matter what you think you may know about all this, you’ll learn a lot from The Stan Lee Universe and I recommend it most highly to anybody the least bit interested in comics or our American heritage.

Everybody’s been reprinting the great classic newspaper strips with such effort that it almost gives a fanboy like me religion. This Pogo series was announced back when Albert the Alligator lost his egg tooth, leaving Walt Kelly’s many fans panting.

It was worth the wait. We get all the dailies from the long-defunct New York Star from the beginning on October 1948 through January 1949, the series nationally distributed by the Hall Syndicate from May 1949 through December 1950, and the initial year’s run of Sunday strips in color from 1950. Reproduction is first-rate; the paper isn’t quite as good as I’d like, but that’s being really picky.

A lot of the conventions with which we are familiar from Pogo were birthed during this period, and most of the characters with which we are most familiar have already been fully realized during the initial Dell Comics run. Walt Kelly’s wit and charm is unmatched in the history of sequential storytelling, and is in evidence here fully developed.

I’d get this book for Jimmy Breslin’s introduction alone. Go. Read this. You’ll charm the pants off of yourself.

The Art of Joe Kubert, edited by Bill Schelly • Fantagraphics Books, $39.99 in hardcover

I have previously gone on record in this and other venues that Joe Kubert is my all-time favorite comics artist and, once again, I will not establish Joe’s bona fides. I’m running out of room, and that is what Google is for. Fan/historian Bill Schelly who, like Roy Thomas is from the first generation of organized comics fandom, knows his stuff and it shows. This is the definitive biography of Joe Kubert, and I would say it is lavishly illustrated but the word “lavishly” pales in comparison by even a quick flip-through of this 232-page tome.

Pure and simple, this is the tribute that Joe deserves. From his youngest adolescent days working for Will Eisner’s shop (obviously, Will was oblivious to child labor laws) to his golden age work to his innovations at St. John’s Publishing to his latter and most familiar DC work to his current efforts as a graphics novelist, The Art of Joe Kubert truly covers, well, the art of Joe Kubert in all its four-color glory. This is an entertaining read, one that will motivate the young wannabe and illuminate the cultural historian. It even taught me a bit about my own roots as an Ashkenazi-American.

For about a hundred bucks, less if you can talk your comics shop owner into ordering them for you for a discount (c’mon, it’s a guaranteed sale), you cannot go wrong with these three books. A couple decades ago, I would have been thrilled with any one of them during a given year. In 2011, all three were released in recent weeks and that is simply breathtaking. Kudos to all.