Review: ‘The Joker: The Greatest Stories Ever Told’ 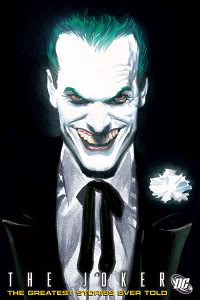 This summer is a big one for Batman’s deadliest foe, the Joker, with the deceased Heath Ledger giving an apparently mesmerizing take on the clown prince of crime in [[[The Dark Knight]]].

And just in time comes the latest printing from DC of The Joker: The Greatest Stories Ever Told

($19.99), which offers some of the character’s legendary moments from his debut in 1940 in Batman #1 to last year’s macabre Christmas tale from Paul Dini.

First, lets dispense with the hyperbole of the title. There are some great Joker moments here, but several of the character’s biggest aren’t included. There’s nothing from [[[The Killing Joke]]],[[[ A Death in the Family]]] or [[[Dark Knight Returns]]], for example.

More than anything, this is a great primer on the Joker, charting his characterizations over his six-plus decades of existence as he became quite likely the most recognizable evil-doer in comics.

First are two stories from Bill Finger, establishing the Joker as an unpredictable and murderous opponent for Batman. The second of these is the most memorable, if only because it’s the infamous “Joker’s Boner” story. Actual quote: “So! They laugh at my boner, will they?! I’ll show them!”

The Joker didn’t change much through the 1960s, with pretty frivolous if violent capers, eventually ended by Batman’s fist. That changed in the late 1970s and early ’80s, as writers Steve Englehart and Len Wein developed the sociopathic and psychotic aspects of the character that have become a mainstay.

The more recent material is dominated by Paul Dini, who contributes what some might call a disproportionate three stories to the collection, including a new edition in this printing, the 2007 “[[[Slay Ride]]]” from Detective Comics.

Dini has left a stamp on the Joker, though, with inspired writing on [[[The Animated Series]]] and later in comics. “Slay Ride” is an especially good example of his approach, as the Joker kidnaps Robin and we get an up front view of his chaotic, violent ways.

That story serves as an excellent coda, simultaneously hammering home two crucial points. First, we’ll never know if the Joker is truly mad or methodically insane. Second, there is no true rendition of the character, but much of his popularity comes from the talented creators that have handled his character over the years.