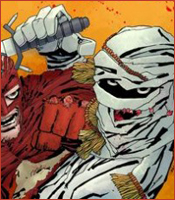 Hello all! Welcome back to my little corner of the Internet. A place I’d like to think you’ve come to like. See what I’ve been doing with the place? I got the wet bar over there in the corner, next to the classic 1996 arcade machine Alien Vs. Predator. I put in those stadium style leather recliners in front of the 60” HD with Xbox 360, PS3, and Wii, in case you want to go faux-bowling. What’s that you said? You want to enjoy some tunage? Let me turn up the 5.1 surround sound, and blast a little Guster. We’ll take it all the way back to Goldfly. Mmmm, yeah, that’s the stuff.

OK, now that you’re all comfy and cozy, let’s chat a little, shall we? I want to address something that’s been nagging me now for a few months. It seems a few people in the industry working today, are pulling double duty. It’s grinding my gears just a bit. Ironic, I know, because I myself am both an artist and a writer. For me to spend the next few paragraphs bitching and moaning seems trite, doesn’t it? Well, that’s the funny thing kiddos. After you made yourselves comfortable, I went and sealed the room. The TV is unplugged, and the wet bar is going back into the closet. You’re stuck here with me, and you’re going to let me get this off my chest. Bwa ha ha ha ha ha ha. Ahem.

Let me start first with Tony Daniels. Most people know him as the consummate artist of Grant Morrison’s run on Batman a few years back. Daniels’ graceful and detailed figures come from that classic Image background, but over the years he’s added a moody elegance to his work. Such that when he made way to DC, he fit in instantaneously. I’d concur most critics enjoyed his work on the Batman R.I.P. series, and as such, his star was set to shine very bright. Under Morrison’s pen, he was subdued. His pages held back where they needed too… and when they were let loose, the dramatic moments elevated the book to something special. And with that success, he was given the reigns to the post-R.I.P. run, Battle for the Cowl. And more than just the reigns to the art, mind you. He took up both the Writer and Artist chairs for this one. It was, in a few words, a complete mess. Issue after issue Daniels packed his pages with beautifully overdrawn characters in an underdeveloped story. Knowing nothing of the back-room politics of DC, left me wondering how the hand of the editorial staff planted firmly up Tony’s rear felt. Perhaps they got a deal on his page rates? Why spend $150 a page on pencils, and $100 on script, when you can pay one guy $200? I don’t have any clue if that’s close, but, man is it ever a hunch.

And here we stand, years later after everyone thoroughly agreed “Battle” was a train wreck… with Daniels once again doing double duty on “Detective Comics.” What’s the definition of insanity again? Detective Comics has been a lesson in “Too-Much-Titude” if there ever was such a thing. Pages are drenched in details. Figures contort in amazingly moving, completely impossible ways. Gadgets fling and zzzzooom from Batman’s utility belt. And the villains are soaked in macabre costumes, and grimaces. But the story? Incoherent. violent, and dumb. Without a dedicated writer to constrain him, Daniels is producing little more than a highlight reel. The rub is though, he’s already in the big leagues. All this posturing will get him what? Another Batman book?

And Tony’s not alone. Long before he was mounting the double duty cannon, there was – and still is – the God-Damned-Frank Miller. When Frank’s not dropping a giant turd on the Occupy Wall Streeters, he’s peddling his book Batman Super Guy Vs. Mohammad. Holy Terror has been critically shat on… hard. What hurt here of course is the fact that Frank’s art is a personal love of mine. His mastery of simplicity mixed with an amazingly deft hand in page layout and composition is such that I’ve never not loved his art. Sin City? A masterpiece in noir. It’s when Frank turns that majestic hand to the rusty old typewriter in his dank basement that I shudder. It seems that he’s awash in nothing but profanity– in substance, and style. Every story he seems to write is the same. Shallow, angry, and drenched in “noir speak.” Sin City was good, seriously. But to rehash it, in theme, in tone, and in production every time thereafter? It rubs the sheen right off the apple.

We get it, Frank. You like crime. Prostitutes. Guns. Profanity. You hate brown skinned people. Hippies. Comic book fans. Without a guide through the muck, Miller’s overselling his anger. Want to do a book about Batman fighting terrorists? Give it to Brubaker, and I’d have no doubt there’s be gold on them there pages. In Frank’s complete control, we get books in near self-parody.

I could list a few other wrartists here, but I think my point is becoming pretty clear. The beauty of comics comes with the collaboration. When all you have to deal with is just the words, or just the art, it forces you to focus on the nuance of the final product. Forced with the task of doing both? It becomes a very rough mountain to climb. The best books in my collection – the ones I hand out willingly to those uninitiated with the medium, – are always ones where the team creates a work where the ends are much better than the means. On its own, Alan Moore’s script for The Watchmen is breathtaking (if a bit maddening). Dave Gibbons’ artwork for the series turned heads with its skillful pacing and solid figure work. Put together? The book is as perfect a thing as I could ever hope to produce with some Unshaven Lad someday. Left to their own devices though, a one man show skates thin ice trying to maintain both substantially hard roles.

Let’s bring this around, back to the irony at hand, before we end this li’l tirade. For those out there who’ve read an Unshaven Comic, there’s little doubt that this article would seem like the pot bitching at the kettle for being black. I myself have donned the solo credit in our last issue (well, for half the issue…). Am I so bold as to suggest I somehow surpassed Tony Daniels or Frank Miller? Hell no. I happily admit that I think my art stinks. I don’t have the skill or talent to compose a page the way those men do.

And hell, I’m a nobody. If I can’t take a little leap of faith in myself and try to tackle both roles in a book, what am I doing trying to break into the industry? Where Tony and Frank have already made it, and proven they have the skills to pay the bills… I’m still slinging logos and catalogs to feed my family. Until DC comes calling, offering me a role in the big leagues, I’m swinging for the fences, showing the scouts that I can pitch and bat if I have to. Just don’t ask me to do both at the same time.

OK, the door’s unlocked. The wet bar is back online. Who needs their drink freshened up? I’m sorry to have kept you so long. Don’t think of this as a rant though. Consider it an open forum. Do you think playing double duty leads to a lack of quality on one side of the page or the other? Speak, and be heard, my citizens of Fishtopia!