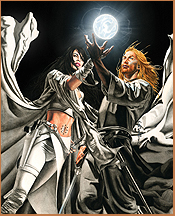 In my circle, my disdain for broccoli is pretty well known. I call them “tiny trees” and I don’t like their smell, their taste, or their texture – but I have eaten them. That’s how I know I don’t like them.

Recently, Dark Horse Comics finally announced the new Star Wars project that Jan Duursema and I are working on. Jan and I have worked on two other series together – Star Wars Republic and Star Wars Legacy – to the praise of a lot of Star Wars fans. This is in addition to my already announced Star Wars spy series, Agent Of The Empire. (plug plug plug plug)

The new series is Dawn Of The Jedi and it goes back and tells the origins of the Jedi Order which, we hope, will have some interest even to the fans who have only watched the movies. We’re doing our best to make it accessible even to those who are not conversant with the large Star Wars story known as the EU (Extended Universe). However, even with all that effort, I know some readers won’t even try it because it’s Star Wars.

And that sometimes makes me scratch my head.

Boiled down to basics, the work Jan and I do are just plain good comics. Good story, interesting characters, terrific art, lots of imagination and lots of fun. But there are fans of mine who have read everything I’ve done but just won’t go near Star Wars. I’m not sure why. If a reader has tried my books, or Star Wars in general, and it just doesn’t speak to them – I got no problem with that. Not every thing I write works for everybody. That’s one of the rules I grokked going into this biz. You can put cheese on broccoli but it’s still broccoli.  However, to not even try it because it’s not your brand?

If there’s an artist or writer that I like, I follow them to at least see what they’re doing. I’m not real big on romance comics BUT if you took any of the other names doing columns here and had them write a romance comic, I’d be there. I’d want to know what they were doing. A Michael Davis romance comic? Oh yeah. I’m there,

It extends now to our political process. If you’re on one side of the political divide, you can’t even listen to those on the other side or you’re disloyal. For one side to be right, the other must be totally wrong. Nothing good can come from “those people” be they Tea Partyers, liberals, or Star Trek fans. We brand ourselves to define who we are and because it’s easier than actually opening ourselves to a story or an idea.

Good ideas, good stories, can and should challenge your preconceived notions. And that can be dangerous. Those notions, those beliefs, are how we define the world and ourselves. If we leave ourselves open to such possibilities, aren’t we in danger of losing those beliefs and thus our sense of ourselves?

Maybe. I’ve found that sometimes by listening to those with whom I don’t agree makes me think of why I don’t agree with them. Or it broadens my horizon and I see things in a different way. Either way, I’m richer for that.

Am I going to tell you that Dawn Of The Jedi is a story that will broaden your horizons and enrich your life? Sure, if it’ll get you to pick it up. I’ll say almost any damn thing. If you pick it up (the #0 and #1 issues go on sale this February, plug plug plug plug) and decide it’s not for you – okay, that’s fair. You tried it and you didn’t like it. You say its broccoli and the hell with it.

But taste it and make sure it’s broccoli.