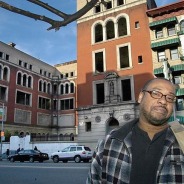 On B-Boys and Pulp Culture:
Black Pulp edited by Gary Phillips and Tommy Hancock
by Michael A. Gonzales
Gonzales.gonzo@gmail.com

pulp culture. Over the years, I’ve interviewed many rap artists and
producers who shared their love for Star Wars, crime movies, karate
flicks and the novels of Iceberg Slim and Donald Goines. Still, I was
surprised when Queensbridge legend Nas told me in 1999 that he had
once created a Black Pulp hero when he was a kid.
“I used to used to draw my own character called Sea God,” Nas told me.
“I copied the body of Conan the Barbarian, but had him standing on the
corner instead of in the forest.” Without a doubt, I’m sure Nas isn’t
the only one with a stash of drawings and/or writings detailing the
bugged adventures of urban champions.
Last year, when respected crime novelist/comic book writer Gary
Phillips invited me to contribute a short story to his latest project
Black Pulp (Pro Se, 2013), co-edited with Tommy Hancock, I immediately
thought of that long ago conversation with Nas and decided I too
wanted to create a hood hero.
Leaning back in my office chair, I closed my eyes and thought of my
own pulp filled childhood growing-up in Harlem: of listening to old
Shadow radio programs that were released on records, watching
blaxploitation and kung-fu flicks every weekend, devouring the
Marshall Rodgers/Steve Englehart’s version of Batman, discovering the
weird worlds of Edgar Rice Burroughs and Robert E. Howard, watching
Buck Rogers/Flash Gordon serials on PBS and falling in love with the
work of pulp artist supreme Howard Chaykin, the dude George Lucas
requested to illustrate the first Star Wars comic book.
After an hour of drifting on those dusty memories, quicker than I
could say, “Batman and Robin, Green Hornet and Kato or Easy Rawlins
and Mouse,” my own pulp heroes Jaguar and Shep were born. The lead
character Coltrane (Jaguar) Jones owns a Harlem rap club called the
Bassment and drives through Harlem cool as Super Fly in a fly sports
car. His murderous friend Shep, who just got out of prison, becomes
his badass sidekick as the two self-appointed crime fighters go in
search of a music minded kidnapper.

Although I’ve never been big on constructing strict outlines for

fiction, I knew that I wanted the period to be 1988, the last year
Mayor Koch was in office. Crack was at its height, Public Enemy’s
brilliant It Takes a Nation of Millions was rockin’ the boulevards,
Dapper Dan was creating his bugged designer fashions and New York City
was still on the verge exploding.
Recalling Fab 5 Freddy, who also appears in the story, telling me
about the jazz/hip-hop shows he did with Max Roach at the Mudd Club in
the 1980s, the finished story told the tale of a be-bop lover trying
to rid b-boys and their music from the streets of Sugar Hill.
While working on the story, I consulted with my good friend Robert
(Bob) Morales, himself an accomplished comic book writer, co-creator
of the black Captain America graphic novel The Truth and a pulp
culture aficionado. Although he was working on a graphic novel about
Orson Welles at the time, he always found the time to talk. Once, when
I thought the Paul Pope/John Carpenter-Escape from New York inspired
climax might be too crazy, Bob reminded me, “It’s a pulp story…there’s
no such thing as too wild.”
So, after several weeks of calling Bob, sometimes a few times a day,
and writing, “Jaguar and the Jungleland Boogie” was finally finished.
Sadly, Bob Morales died suddenly on April 17, so I’d like to dedicate
the story to him.
In addition to my b-boy/be-bop tale, Black Pulp has a cool line-up of
creators of color that include famed novelist Walter Mosley, who
penned the introduction, Gar Anthony Heywood, Christopher Chambers,
Kimberly Richardson, Mel Odom and others.
Black Pulp: http://www.amazon.com/dp/1484135717
Walter Mosley introduction:
http://www.huffingtonpost.com/walter-mosley/post_4876_b_3346575.html