“Voltron: Defender of the Universe” Coming to Game Consoles Next Week 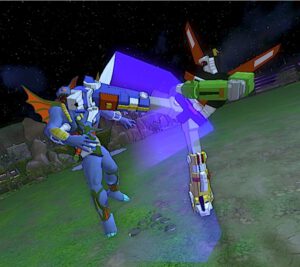 I missed the Voltron craze when the series first debuted in the United States but we here at ComicMix certainly recognize it remains a well-loved series. As a result, the following announcement should be welcome news.

AGOURA HILLS, Calif. – July 19, 2011 –Infracells are up, mega thrusters are go and the legendary robot hero is ready to make his resurgence in Voltron: Defender of the Universe, scheduled for release in October on Xbox LIVE® Arcade and PlayStation®Network.

In this brand-new take on the classic Voltron animated adventure, players will find themselves teaming up to battle the evil forces of King Zarkon across the varied landscapes of Planet Arus. Interwoven with clips from the original animated television series, the new game from THQ (NASDAQ:THQI) promises a re-mastered adventure in stunning high-definition.

Voltron fans can finally relive some of the most defining moments from the classic series, or even introduce a new generation of young Space Explorers, as they command any of the individual Lions or even team up to form Voltron and wield his epic blazing sword.

Galactic peacekeepers may choose to play either online in seamless 1- to 5-player co-op or offline in 1- or 2-player co-op. Players will select a Lion based on a number of strengths, resistances and elemental attacks that they use to battle fierce Robeasts and a number of other familiar adversaries.

“We really wanted to create a game that’s exciting, true to the original series and challenging to play,” said Peter Armstrong, executive producer. “All of us here are big fans of classic Voltron, and we’re really proud of what we have created.”

Voltron: Defender of the Universe will be available on Xbox LIVE Arcade (800 Microsoft Points) and PlayStation Network ($9.99).