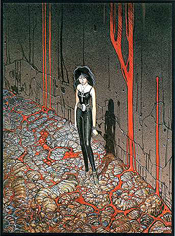 At the very end of 1973 I was lurking about in a Woolworth’s in downtown Montreal. I was suffering from my worst case of comics envy ever.

I was seduced by the graphic novels rack. That’s not what it was called, but that’s what it was. Dozens of titles by Jean Giraud (a.k.a. Moebius), Phillipe Druillet, and all kinds of master comics creators the likes of which we had not seen in the States. Beautiful stuff. I could follow much of the storytelling but little of the story itself.

I was also seduced by the wide range of subject material, with nary a cape in sight. Western, science fiction, private eye, romance, ennui-ridden existentialism, and stuff that seemed as though it was influenced by lysergic acid diethylamide the likes of which we never had on St. Mark’s Place. In short order I stumbled upon equally awesome material from Japan and Italy and, possibly, Mars. I experienced a beautiful work covering the widest range of subject matter imaginable. But in comics, such a range was not imaginable, not in the United States.

A couple years later the National Lampoon folks started up Heavy Metal, and while it wasn’t as interesting as it could have been, the new magazine got this material out there. At worst, it was a gallon of water brought to the desert. At best, Heavy Metal was a door opener.

One might think that a logical way of dealing with my comics envy would be to learn a foreign language – certainly French or Japanese. No such luck. Like most Americans I’m lacking in the foreign language learning gene: I took five years of Spanish and lived (and now live) in neighborhoods with or near a significant Latino population and I can barely mumble a few phrases, “perdóname” being my most heavily used.

38 years later a lot of wonderful material has been translated – but that’s not the best part. The best part is, the American comics medium has grown to the point where we now create stories that cover many of the genres that we see overseas. Not anywhere near all, but many. We still don’t have comics for senior citizen grandmothers the way they do in Japan, but we’ve gone a lot further than the 1973 diet of capes, muscles, some horror, a few klutzy teenagers, and a smattering of “children’s comics.” For one thing, we are finally seeing something of a return of children’s comics, thanks to outfits like Boom! and Ape.

Maybe electronic distribution will change all that. Clearly, it’s the best way right now to attract new readers, but the promotion budget has to be there and that ain’t easy.