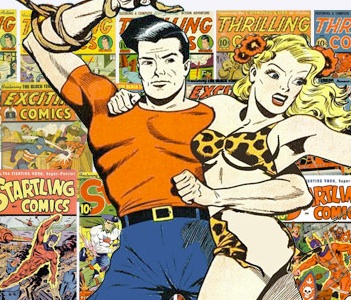 With a resume that could best be described as the very definition of awesometasticness, Will Meugniot is a working legend. Given the opportunity to sit down with him–if only through these odd and twisted halls of the interwebs and Skype–I was tempted to simply pelt him with geeky question after geeky question. Allow me a quick explantion: Reading through his resume, Will Meugniot has worked on an amazing array of projects anyone in Generation X or before would swoon over. As a storyboard artist, writer, producer, and director for (amongst other things) Captain Planet, EXOsquad (aka EXO-Force as you’ll see in our next installment), Jem, Slimer and the Real Ghostbusters, and comics like Tigra, The DNAgents, and Vanity… suffice to say I had a hard time not grilling the poor man for several days.

As we mentioned previously, Will is writing and drawing a brand new comic with an old school feel. The N.E.D.O.R. Agents will be hitting your local comic shop shelves, today (November 9th, 2011), and Will was nice enough to sit down with me to give all you ComicMixers the 411. And don’t worry, we totally dish on his work in animation, later this week. Read on!

COMICMIX: Before we get ahead of ourselves, could you tell me, and all of those butchering your name from above how we pronounce your last name?

WILL MEUGNIOT: It’s pronounced Min-Ee-Oh. I think many people have [butchered my name] in the past. Mark Evanier and I used to dub ourselves “The most unpronounceable team in comics!”

CMIX: First and foremost, let’s talk about what brings you here today… the N.E.D.O.R. Agents… Give the ComicMix readers the ‘elevator pitch’ of the project.

MEUGNIOT: First and foremost, it’s a piece I myself would want to be reading right now. N.E.D.O.R. Agents is a period piece; taking these characters from the 40s and reviving them into 1965. I’m treating them the same way other publishers treated revival characters like Captain America, Green Lantern, Flash, and characters of the period were. This is an update for the atomic age. It places these classic characters of the 1940’s in the world of 1965, and the race to space. Of course the race is interrupted by aliens who are already invading Earth!

CMIX: And are the characters being “retconned” here into starting their careers in 1965, or have they simply been elsewhere?

MEUGNIOT: Well, actually the reason these characters haven’t been seen since the 40’s (as you’ll find within the story) is because they have been secretly forming a covert team of superpowered individuals to fight an impending invasion. Now 20 years after the creation of that agency, we’re catching up with them and their super kids! 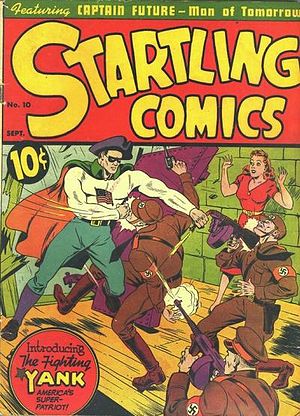 CMIX: The N.E.D.O.R. Agents hail from the 40’s… and contended with Superman, Batman, and the like on the shelf… but didn’t fare the continued fame and fortune as those DC and Marvel characters. Are you bringing back these public domain heroes primarily for those looking for a little revisionist history, or those looking for something ‘superhero, but not mainstream’?

MEUGNIOT: It’s an experiment for me. Honestly, despite many of these characters being very popular in their time, their publisher had closed up shop. Because of that, they missed that amazing superhero revival in the 60’s. In 1967, I got this fanzine that happened to feature Pyroman. I found him instantly appealing. So much so, that I was amazed he didn’t carry over into the 60s the way so many other superheroes had done. You could say with this book, I’m getting a chance to rewrite history a bit, and really enjoy doing a book set in 1965.

CMIX: And the last people saw of the Fighting Yank (and many involved in the N.E.D.O.R. book), he was in Dynamite’s Project: Superpowers. Is this the same Yank and friends?

MEUGNIOT: It is in the sense that all versions of these characters are sourced from the 40s’ stories about them. But I purposefully didn’t really read that series, specifically because I knew that I wanted to do something with the same characters (since they are public domain.). But I think my take is different, because I’ve continued the characters within the same continuity from their previously published materials. The N.E.D.O.R. Agents is a very true-to-their-roots concept. This book is what I feel these characters would be like had their books not stopped. Carrying it into 1965 in both tone and aesthetics gives you an adult book that still captures all that was great about those silver age books. Inner thought bubbles, splashy sound effects, and ‘James Bond’-like cheesecake.

MEUGNIOT: New Earth Defense Organization Reserve! When I first wrote it down, I originally had it as ‘Reserves’, but I think it sounds cooler as the singular ‘Reserve’.

CMIX: Who is your favorite Agent to draw?

MEUGNIOT: So far with the book, I’ve got a feeling Pyro-Girl will be the breakout character. I’m also enjoying drawing Black Terror. He’s got such a great design. And beyond that he’s the most fun to write as well. I think I’ve got a great hook in the character. You see, here’s this hero who has been taking powerful steroids for the last 20 consecutive years, which come with the side effect of making him eternally young. And with that youth, comes the same rush of hormones of youth. So you end up with this man well into his middle age, with the randyness of a teenager! And his partner, Tim, whose exposure to the formic vapors also gives him his powers, is stuck in time so-to-speak. He looks 15, but had the mind of a 35 year old. So you get two tragic beats for these heroes who can’t really find love, without being either creepy or unethical.

CMIX: Most importantly… where can ComicMix fans look to get their hands on the book?

MEUGNIOT: The best thing to do is go to your local retailer, and have them order you FemForce 157-159. Femforce 158 is actually a flip book, with N.E.D.O.R. Agents #0. Plus there’s plenty of additional pinup art by my friends in there as well, including a killer Black Terror by Rick Hoberg.

Stay turned for more installments of this great interview! In the next installment, I’ll be nerding out with Will over EXO-Squad, Slimer and the Real Ghostbusters, Spider-Man Unlimited, and the X-Men cartoon shows!

In the mean time, you can check out some great previews of the N.E.D.O.R. Agents (from FemForce #157) on Comics Continuum.

You can also check out a promotional video: