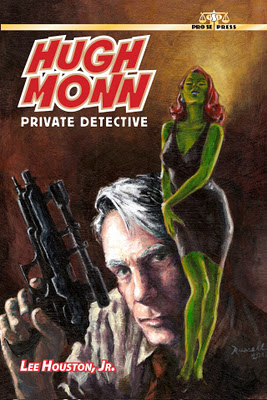 Publication Date: Oct 27 2011
ISBN/EAN13: 1466481900 / 9781466481909
Page Count: 184
Binding Type: US Trade Paper
Trim Size: 6″ x 9″
Language: English
Color: Black and White
Related Categories: Fiction / Mystery & Detective / Short Stories
The hard-boiled private eye genre is one I dearly love.  The trench-coated shamus with a cigarette dangling from his lip, .45 automatic or .38 revolver in a well-worn shoulder holster, fedora pulled down low over his forehead, the faithful gum-chewing secretary and even more faithful fifth of scotch in the desk drawer…it’s a genre I never get enough of.  And since television and movies have apparently abandoned the P.I. it’s up to writers like Lee Houston, Jr. and books like HUGH MONN, PRIVATE DETECTIVE to give me my fix.
Let me explain; even though Hugh Monn lives and works on the far distant planet of Frontera interacting with many different species and using advanced technology, the tone and feel of the character and the eight stories in the book are pure 1950’s.  Lee drops in a mention here and there of some bit of sci-fi such as a character having green or purple skin or Hugh’s weapon of choice being a Nuke 653 Rechargeable but that’s just throwaways Lee lobs at us once in a while to remind us that we’re not on Earth.  But he doesn’t go into any real detail as to how this future civilization operates or how the technology works.  When the subject of detective stories crossed with science fiction comes up, I usually mention Larry Niven’s stories and novels about Gil The Arm or Roger Zelazny’s “My Name Is Legion” since in those stories, the science fiction is integral to the story.  Take out the science fiction and you wouldn’t have a story.  Not so with Lee’s Hugh Monn stories.  They could easily have been set in 1950’s Los Angeles or New York with a little rewriting.  But I digress…let’s take HUGH MONN, PRIVATE DETECTIVE for what it is, not for what it isn’t.
Hugh Monn is a Human and yes, he freely admits to his clients that his name is a gag.  But one he prefers to use as he’s got some pretty big secrets in his past he’d prefer to keep to himself.  As a detective, Hugh is capable, sharp, principled and dogged in his determination to solve his cases and get to the truth.  Hugh isn’t a pain-in-the-ass who rebels against authority and isn’t a lone wolf who doesn’t play by the rules.  Matter of fact, Hugh conducts himself as a total professional.  He doesn’t shoot when he doesn’t have to, he’s polite to everybody he meets and he co-operates with the authorities.  In particular, Lawbot 714 who he runs into in a couple of stories and who I wouldn’t mind seeing become a regular if Lee gives us more Hugh Monn cases.  He doesn’t smoke, doesn’t drink, he likes kids; he holds open the doors for old ladies.  I think you can tell where I’m going with this.  Hugh’s a fine detective but as a character I found myself wishing that once in a while he’d haul off and slug a suspect for no good reason other than he doesn’t like the fact the guy has eight eyes.  Hugh could stand to be a little rougher and not so polite.
The story “Shortages” is a good example of how Hugh Monn solves a case using his understanding of both humans and aliens and his powers of observation.  It also introduces the character of Big Louie, a Primoid.  Big Louie is the main suspect in a series of thefts being committed at a high security pier.  It’s a pretty good locked room mystery and the relationship between Hugh and Big Louie is the primary attraction in this story, as in “At What Price Gloria?”  Hugh and Big Louie have to rescue Big Louie’s wife Gloria and stop an assassination attempt.  I only wish more of the stories had been as suspenseful as this one.  In some of them, the mystery really isn’t that hard to figure out as there’s a lack of suspects so the solution comes down to either being this one or that one.  And I never got a sense of Hugh being in any real danger in any of these stories.  But Lee should be commended for trying different types of stories such as “For The Benefit of Master Tyke” which hinges more on the healing of a family than the solving of any real crime.  I picked up halfway through “Where Can I Get A Witness?” is intended as a homage to the 1944 film noir “Laura” and I enjoyed it until the very last paragraph where it felt to me as if the writer had stepped in to give his opinion of his own story and didn’t allow his character to do so.
So should you read HUGH MONN, PRIVATE DETECTIVE?  As a first book from a new writer, I’m inclined to give Lee a pat on the back.  There’s a lot to like in his writing style.  He does know how to keep a story moving but he shouldn’t shy away from rolling in the dirt and giving his characters some sharp edges.  I wouldn’t mind seeing Hugh Monn tackle some more cases but I also wouldn’t mind seeing Lee Houston, Jr. strip away the political correctness and explore the real darkness of Frontera.
Share