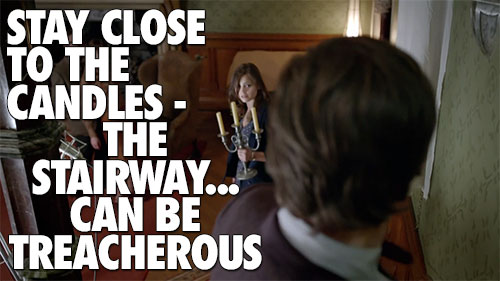 Quite often ghosts are described as spirits who cannot bear to leave their loved ones.  That appears to be the case in this week’s Doctor Who adventure, as an old house seems to be the home of a creature (or two) that makes you want to run and…

Caluburn House is home to a roaming spirit who has been appearing for centuries, calling for help.  A former espionage agent and his assistant are dedicated to discovering her secrets when The Doctor arrives.  It’s evident quite quickly that the ghost is not all she appears to be…and she is not alone.  The Doctor is stranded, and Clara has to get past what appears to be a resentment by the TARDIS to save him.

Bluntly, this is the story people were expecting when they heard Neil Cross was writing for Doctor Who.  An indeed, it’s the first script he wrote – he had this idea first, and came to Moffat with it.  Rings of Akhaten was good, but didn’t have the edge one would expect from the creator of Luther.  A solid story with a stellar cast, including two exemplary guests.

Jessica Rayne (Emma Grayling) Hit the ground running in her short acting career, striking gold with the role of Jenny lee in Call the Midwife.  She’ll be back for the anniversary special An Adventure in Time and Space, playing Doctor Who producer Verity Lambert.  She also appeared with the rest of the Midwife cast in a sketch on Red Nose Day this year, with a particular guest star.

Dougray Scott (Alec Palmer) Has had an impressive career, both for the roles he took and the ones he almost had.  He was originally scheduled to play Wolverine in X-Men, but when production on Mission Impossible II went long, he had to give up the role.  He was also in the race to be the next James Bond, a part that eventually went to Daniel Craig.  He’s currently appearing in the thriller mystery series Hemlock Grove.

Jamie Payne (Director) has worked mainly in television, including three episodes of Call the Midwife and several genre shows like Primeval, Askes to Ashes and Survivors. I really liked the jump-cutting from several camera angles during conversations – gave the scenes a more disjointed nature.  Even more so than the Krafaysis in Vincent and the Doctor, the beasts are just lonely for each other, and reaching out for anyone who can help them.

THE MONSTER FILES – The Crooked Man follows a theme in Doctor Who of late – he’s not actually named in the episode, and he’s not actually a bad guy. The Doctor realizes it’s not actually trying to harm anyone, it’s just rapped in the same time/space event as Hilla Tacorien.  To make its movements a bit off, they filmed the suit actor moving backwards, and then reversed the film, resulting in being a bit irregular-looking when played.

Similarly, The Caliburn Ghast is another example of a phenomenon mistaken for supernatural when it’s just super-science. Scaroth of the Jagaroth was also spread across time, manifesting itself as seven distinct beings in City of Death.

Hmmm…a being appearing at several times in history, seemingly connected in some way… Oh, never mind, just a coincidence…

NOTHING BEATS AN ASTRONAUT – That spacesuit may look familiar – it’s the one Ten wore in The Impossible Planet / The Satan Pit.  He wears the same helmet as he enters Bowie Base One in The Waters of Mars,

STAY CLOSE TO THE CANDLES…THE STAIRWAY CAN BE TREACHEROUS – Not really a hint or anything, I just loved the way Clara hung onto the candelabra long after the candles got blown out.

THE QUESTION’S NOT WHERE…IT’S WHEN – The TARDIS didn’t used to get used in the body of an episode.  Usually it was a device for bringing the adventurers to the crisi of the week, and is them promptly forgotten about, or like in last week, taken off the table dramatically.  It’s really only in the Moffat years did it get more often used as a tool to solve the mysteries of the week.

“Member of the Baker Street Irregular, the Ministry of Ungentlemanly Warfare” – A real covert ops department in the British government during WWII, those were both nicknames for the Special Operations Executive, also known as “Churchill’s Secret Army”.  One of its members was (yes, that) Christopher Lee.

“Experience makes liars of us all” – There are SO so many lines in this episode that could easily be applied at The Doctor.  Palmer is talking about his brief life in espionage, and later laments the deaths he has caused – imagine how many times more The Doctor feels these things.

“Whiskey is the the eleventh most disgusting thing ever invented” – Ignoring the potential correctness of the phrase, this is just another passing use of the number eleventh that permeates the series, all alluding to the fact that The Doctor is in his eleventh regeneration, starting with matt’s first episode The Eleventh Hour.

“A blue crystal frm Metebelis III” – Oh boy did that one make the Whofen squee.  The planet Metebelis III was possibly the first attempt to create an arc storry on Doctor Who.  It was first mentioned in Carnival of Monsters as a planet he wanted to Take Jo Grant to after his exile was lifted.  He made a few attempts to reach it, finally succeeding in The Green Death, retrieving one of the blue crystals.  As he explains in this episode, the crystals enhance mental energy, which in that past episode, allow a group of people to break from the control of a sentient computer.  He gives the crystal to Jo as a gift as she leaves his company, only to have it reappear in Pertwee’s last adventure, Planet of the Spiders.  Here allowed a mentally handicapped man to read, and eventually to be healed of its damage that cause him handicap.

“Subset of the Eye of Harmony” – The Eye of Harmony is traditionally the name of the Black Hole that Rassilon stabilized and set in the core of Gallifrey, to use as a power source for all Time Lord technology.  In the TV movie it’s said to be on the TARDIS itself.  There’s a couple of theories to explain that, the most plausible being that each TARDIS is connected to the original Eye on Gallifrey.  But with Gallifrey now trapped in the time lock as part of The Doctor’s actions in the Time War, the Eye is likely a stand-alone power source.  It’s recharged itself lately on Rift energy, like the one found in Wales.  This is in fact the time time the Eye has been mentioned in the new series.

“In four seconds the entropy would drain my heart – in ten seconds I would be dead” – It is assumed that the conduit that Emma opens would prevent that eventuality, as they were in the pocket universe for more than four seconds.  Once the way was open, the TARDIS opened up for Clara (by itself – note that modern Clara hasn’t got a key) and made the dangerous trip.  And then again at the end of the episode.  Presumably the trip through that conduit is not as arduous as a full blown trip in the time vortex, which explains how The Doctor and The crooked Man survived it hanging onto the outside.

“Every lonely monster…needs a companion” – See earlier comment about statements not always referring to whom they’re originally said about.

“Is she real?  as in, actually real?” – That’s another “Clarallel” – it’s very similar to a line Future Oswin spoke in Asylum of the Daleks, asking The Doctor if he wasn’t a figment of her imagination.

“Cold…warm…cold…warm” – What interesting is that it’s supposedly it’s Hilla and Emma & Alec who have the connection.  But the connection gets MUCH stronger when Clara walks through the odd manifestation The Doctor chalks off.  At first, many folks online thought it was because Clara herself was the anomaly.  That wasn’t the case, but since we learned later that the ghost was a temporal anomaly, might not another temporal anomaly also strengthen the link?

“It sticks out, like….a big chin.” – We’re not talking about Emma anymore, are we Clara?

“We’re all ghosts to you” – Here we see the sum total of Earth’s history, from its fiery origin to its fiery end.  And Clara can’t cope with it.  She imagines how insignificant humans must look like to him.  Wilf had a similar conversation with The Doctor, saying “We must look like ants to you”: The Doctor replied “I think you look like giants”

“You are the only mystery worth solving” – As before, The Doctor may well be talking about Humanity as a whole…but he may well be looking straight at Clara and talking to her specifically.

“It doesn’t like me” – Clara’s belief that the TARDIS “doesn’t like” her was first referenced in Cross’ last story, and it was easy enough to wave off as worry.  Here’s it’s placed flat in the middle of the room and has a lampshade on.  Theories have abounded that Clara may be an anomaly of time, as Captain Jack became when Rose made him a living Fixed Point.  More than a few people have drawn more than a vague connection there, suggesting that Clara may be related to Jack in some way.

The interaction between Clara and the TARDIS is priceless, from Clara called her a “cow” to the TARDIS choosing Clara’s own image, because it’s programmed to project an image the viewer will trust and esteem, and realizing the only person that means for Clara is herself.  Considering the title and plot of next week’s episode, it’s clear this plot thread will be followed quite a bit more.

“You need a place to keep this” – The Doctor’s confusion is understandable – there’s been either an umbrella stand or a hat rack in the control room for almost every iteration of either the ship or the Doctor.  It’s almost conspicuous in its absence.  I earlier posited the theory that what we’re seeing as the control room now is the default design, the design for a person who couldn’t care anymore about how it looks, and one who wasn’t expecting guests, so they wouldn’t need a hat rack.

“Clara – what is she?” – As in The Almost People, The Doctor is ostensibly just out for an adventure when he’s actually looking for information about his companion from an expert source.  Emma has nothing but good to say about her, which should please The Doctor, but likely only makes him more curious.

“Don’t trust him…there’s a sliver of ice in his heart” – but is it at all possible that based on this statement from earlier in the episode that she’s lying?  She’s a powerful enough psychic empath that The Doctor seeks her out to get a reading on Clara – odds are she’s right about what she sees in him. She just may not understand the whys and wherefores that cause d it, and assumed the worst.

NEXT TIME ON DOCTOR WHO – One of the more promising titles in the series – Journey to the Center of the TARDIS – in one Saturday hence.