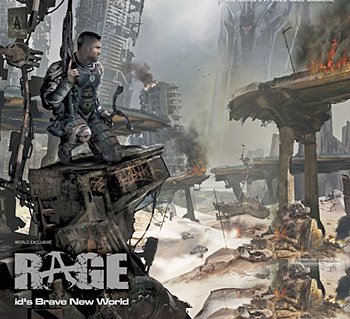 It’s been six years since id Software’s last title (the expansion [[[Doom 3: Resurrection of Evil]]]) and in that time, lead programmer John Carmack has crafted one of the most technically sound shooters for this generation of consoles. RAGE starts out strong, as a tale of a selection of pseudo super soldiers are sent into stasis prior to a giant asteroid crashing into the Earth. Only one survives the damage, and you play this voiceless protagonist, in various missions across the post-apocalyptic wastelands. Sadly, this is where the story both begins and ends, as storytelling wasn’t obviously the focus of the game’s long six year development cycle. Instead, your character plays errant boy to anyone who asks, going on fetch-quest after fetch-quest, retrieving this and that for various folk in order to ultimately…just repeat doing that.

It’s not to say that the game is no fun. Far from it, actually, as the fetch-quests lead up to a series of fantastic gun battles and large set pieces. The wastelands are host to many manner of bandits, scabbers and sundry evil-type folk, and each character has strong and wholly different character AI that behaves uniquely in battle. Enemies don’t just seek cover and shoot blindly, some will charge at you, some will flank you, and all will try to bring you down with a ferocity that would make a Bengal tiger run in fear. The animations of reach enemy is also unique; shoot them in the side as they charge and they tumble down, staggering to regain their footing, all the while still closing on you. They leap from walls, run at you screaming…it’s all very intense.

You have a variety of your standard shooter-game weapons, but the most unique is the wingstick, a three pronged bladed weapon you can hurl with accuracy to lop of heads at a distance. There are also a number of weapons and items you can craft as well, finding items around the wasteland to assemble large lock destroying devices, advanced weaponry and ammo, and more.

The landscape itself is vast, and traversing it is a game within itself. Beginning with a small ATV and working up to a buggy outfitted with all manner of weapons, you can race around and discover new locales, missions and even actual races all within the hub of the main wastes. There are also bandits to contend with as you drive, which serve to make use of those weapons on your rig. The game’s multiplayer component is surprisingly made up of ONLY the vehicular based missions, and not the shooter element so prevalent in the main game.

When all is said and done, RAGE ends up as a mixed bag. The single player elements are fun and look fantastic, but the overall story is severely lacking and the final cliffhanger ending is just downright annoying. Likewise, the multiplayer elements are fun, but not something you’ll spend a whole lot of time on, unless you really like racing games. It’s worth a look, but perhaps only at the rental level.