Monday Mix-Up: “The Brave And The Bold: The Lost Issues” 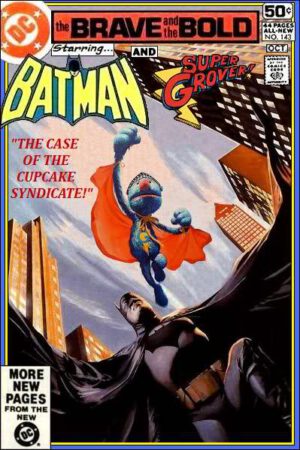 The patron comic book of Monday Mix-Up has always been The Brave And The Bold, a comic book that delighted in mashing up weird combinations of characters, usually Batman with characters that made almost no sense to combine with, like Deadman, Kamandi, Jonah Hex, Sgt. Rock, Adam Strange, Lois Lane, Scalphunter, the Legion of Super-Heroes, the Unknown Soldier, the Guardians of the Universe, the Joker, R’as al Ghul, and the House of Mystery. This tradition has been carried on in the TV series [[[Batman: The Brave And The Bold]]], which has included many of those combinations and added Space Ghost to boot.

But for some, those combinations just aren’t going far enough. For those, we present The Brave And The Bold: The Lost Issues. Now you can find the missing team-ups with Batman and Jack Bauer, Iron Man 2020, Spider-Man 2099, Harvey Birdman, Groo, Galactus, Dirty Harry, Darth Vader, and Adam West.

Not to be outdone, if you delve into the archives you can also find all the missing Marvel Two-In-One issues where the Thing meets Young Justice, Vampirella, Wallace & Gromit, Tintin, the Warlord, Snoopy, the Spirit, the Teenage Mutant Ninja Turtles, The Walking Dead, and Thing #2 and Thing #1.