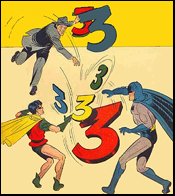 Math. Ugh. Hate it. Too real world for me. Unyielding, unforgiving, no sense of humor, and numbers don’t talk to me the way words do. My brain isn’t wired for it. However, numbers are a part of comics and comic book writing.

Certainly there are the important numbers regarding sales, but they also figure into telling a story. Let’s go through some of them. First number: the number of pages. Right now, your monthly comic book is 22 pages long. Let’s say you’ve been asked to do a fill-in story or a complete in one story for a given book. There are certain space limitations you need to take into account.

How many panels are in a page? Well, your first page is usually the splash page which means one big panel. This page also usually has the title of the story and the credits box for the creators. Here’s some rules of thumb for the other pages: when there’s a lot of action, you use fewer panels per page. If it’s a talk scene, you can have more. I generally figure that it will average out to five panels a page. The splash page is one panel so you have 21 pages times five panels. We do the match and the whole thing totals 106 panels in which to tell your story.

There are also limits to how much you can put in a panel. This includes speech balloons, thought balloons, captions, and sound effects, if you have them. You don’t want to crowd the art. I generally figure the limit of all of the above is three per panel.

There are also limits to how much you can put into each word balloon, thought balloon, or caption. Again, I use a rule of thumb and it’s based on my font type and size. I tend to use Geneva 14 point (my eyes aren’t great and that’s what I can most easily see). So I figure the maximum is three typed lines per balloon or caption. Again, you can’t do that with every panel or you’ll wind up with the Wall of Words that gets ignored. Again, the Bendis Exception applies.

There’s a bit more math with telling a story as well. Each panel should have one clear definable action per panel. Batman leaps but he does not leap, land, spin, and hit the Joker in one panel. Asking your artist to draw that is grounds for justifiable homicide. I’m kidding. Your artist won’t kill you; he/she will simply ignore your instructions and find a way to make it work. But they will hate you… with justification.

You can have a secondary character do something in the panel as well but you can’t do that a lot unless your artist is George Pérez who will add more action if you haven’t. The Pérez Exception is the artist corollary to the Bendis Exception.

And you have to do all this without making it seem crowded or rushed.

That’s the mathematical reality to writing a single issue comic book, kids. If you’re doing an arc, then you multiply by the number of issues. The number of issues you’re allowed will depend on the price point (again, a number) the company figures the public will pay. It’s usually four or five issues. So, for an arc, you can multiply the above totals by those numbers. Still not a lot of space. Finally, there are deadlines, which are another set of numbers, namely the date by which it’s all due. Violate that at your peril.

And that, as our friends in the newspaper trade were wont to say, is -30-.