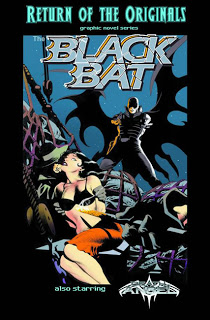 Longtime readers of my review column know that I’m a big fan of Mike Bullock’s run on The Phantom. So when Moonstone announced their “Return of the Originals” projects, I was intrigued to see Bullock’s name on both a revival (The Black Bat) and a new creation (Death Angel). This collection collects stories of both characters, though the cover is a bit misleading — it prominently features The Black Bat, with a relatively small “Also Starring Death Angel” logo on the lower right. There aren’t enough Black Bat pages to make it a graphic novel on its own so I understand the inclusion of Death Angel but I would have preferred a title that made it clearer that this was, in fact, a book with equal amounts of both heroes.

The front and back covers are by Tom Grindberg and are absolutely gorgeous. I really, really liked both images and I think the cover will definitely help sell a few copies. Super stuff.

Inside the book we get alternating Black Bat & Death Angel stories (both comic and prose), with one short teaming the two. In both cases, the heroes are tracking down drug pushers and the like. I was a little confused about the era these stories were set in — some things in the Black Bat stories definitely made me think this was set in the 1930s (fashion, the language used, etc.) but Death Angel seemed more modern, both in design and in terms of her hi-tech nano-fiber tachyon-shooting power suit. The two characters interact, so obviously they are in the same era, whenever that may be.

Let’s tackle The Black Bat first. This is not your father’s Black Bat. As in the original stories, this is District Attorney Anthony Quinn. Blinded by a criminal’s attack, Quinn later gets his vision restored and takes to the night as a vigilante. But in this version, The Black Bat suffers from multiple personality disorder and is as bloodthirsty as The Spider. While interrogating criminals, he uses various legal terms to question them, all the while arguing with himself for leading the witness, etc. It’s an interesting take on the character but purists will feel that this is not The Black Bat and perhaps should have been a new character instead. I’m okay with updating characters and this one retains enough of the original for me to recognize him but his willingness to kill (and kill graphically) was shocking. I wish there had been more time to show The Black Bat in his civilian identity, though. The profile that’s included implies that he’s relatively normal in his day-to-day affairs and that it’s only as The Black Bat that his mental instability comes to light. I’m curious how that would have played out. There were places in the story – and I’m not sure if the fault lies with the script or the art, or both — where things felt very, very disjointed and the scene jumps made me pause and flip back a few page to see if I’d missed something. It kinda felt like I was reading the Cliff note’s version of much cooler stories.

From an art standpoint… Hmm. Michael Metcalf does all but one of the Black Bat stories (Fernando Peniche does the one that teams The Black Bat with Death Angel) and I have to admit… I did not like it. The art is far too scratchy and actually looked unfinished in places. It detracted from the story. There were individual panels that looked kind of cool but overall, the story was not served well by this. The Peniche art was a step up and I liked it much better.

Death Angel is a far stronger package overall — perhaps because the burdens of our past expectations are not challenged here. With The Black Bat, pulp fans are constantly comparing and contrasting this version to the original — but Death Angel is a new character and is free from that. Strangely, Michael Metcalf does the art on these sections, as well, but the art looks much, much better. I can only assume that Metcalf deliberately used a different style on The Black Bat stories — this artwork is much stronger.

As with The Black Bat, Death Angel is a vicious character. Her stories all revolve around two things: drugs and sexual abuse. This latter plays well off her origin but I would have liked to have seen a little more variety in the threats she faces here. I found the Death Angel stories to be more interesting and would definitely like to see more.

The overall package… I will say that taken as a whole, this is probably my least favorite of Bullock’s works to date. If I separated out the character arcs, I’d give much higher marks to the Death Angel portions of the book.

Do I think it’s worth your time and money? If you’re looking for the classic Black Bat or if you like your heroes to be of the “don’t kill, but bring the bad guys in for justice” variety… No. If you’re looking for bloodthirsty vigilante types or want to sample a genuinely interesting New Pulp hero in Death Angel, I’d say yes.