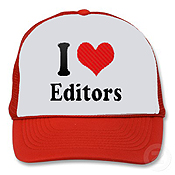 This past weekend I was graced with the presence of ComicMix EIC/Columnist/Cranky Elderly Statesman Mike Gold. He invited me out for a brisket sandwich and conversation. For those not in the know, Gold and I are Jews – and as such, after circumcision, Bar Mitzvah, and a wedding to a Jewish bride, “brisket and conversation” is the next milestone in the Hebrew circle of life. In a day I’ll not forget for a good long while, we waxed poetic on a bevy of topics. It was like “Tuesday’s With Morrie,” except no one was dying. One point that seemed to come up again and again revolved around the state of the comic book industry. And when the dust had settled, and my brisket was fully digested, it came to me. There’s plenty of good going on in comics today, but for all the bad the finger of shame is pointed heavily at the editors’ desks.

What is a comic book editor? Well, he or she is many things to many people. To artists and writers, they are the boss. They assemble the parts, and roll out the final product. They help dot i’s, cross t’s, and make constructive criticism to ensure that the book that hits the shelf is the best it could be. To the fans, they are mysterious figure-heads who get their names right under the talent on the title page. They are the kings at conventions, giving sage advice one minute, and spinning bad fan-reaction the next. In the days before the Internet they were the keepers of secrets – the walking Wikipedias of their brands.

And today? They are that and more. Constructors of continuity, ruiners of rumors, and dolers of dreams. They say absolute power corrupts absolutely. Has their hubris finally caught up with them? I offer some proof, by way of my all-powerful-never-wrong-because-I’m-a-columnist opinion.

How about the Epic Cross-Over of Infinite Magnitude! The first time it happened it sure must have been novel. Upend the whole universe and throw all the heroes together in a big fight. Sounds cool, right? Sure. And I bet it sold like hot cakes. A chance to see Spider-Man, Captain America, The Thing and Ben Gallagher all fight Dough Boy, Red Skull, and Avalanche no doubt equaled a nice spike in sales, and plenty of direction for the respective players, when the dust settled. But be it the editors, or the powers that be behind them. what was a once-in-a-decade deal has now become a yearly escapade. And it drags down the whole industry with it. And where it used to be a single book to encapsulate the ruckus, thanks to those editors, it now permeates the entire line of comics coming out.

I’ve been truly enjoying Matt Fraction’s Invincible Iron Man now for two and half years. But lately, the books have been disjointed, discombobulated, and terribly boring. Fear Itself has consumed it, and because I’m not interested in Marvel’s excuse to dress everyone up in spikes and Tron lines. I’m buying a book that makes little sense. And when the crossover is over, I’ll invariably have to suffer for at least an issue or two more to deal with the eventual fallout. And the whole time, I can’t help but see the puppeteer’s grimy hand placed sorely up Matt Fraction’s asshole.

And yes, I know he is the lead architect/writer of Fear Itself. But I doubt he walked into the editor’s office with the pitch saying “This needs to bleed into seven different mini-series, and 13 other books.” The fact is with each passing summer “epic,” the publishers invariably encompass more and more books. And every time they do it, it stops any forward momentum on a series cold.

Invincible Iron Man was an amazing deconstruction of Tony Stark, full of intrigue, new and old villains, and a strong cast of supporting characters. Thanks to Fear Itself, I’ve had to suffer three or four books of Tony building weapons with dwarfs while he drinks. The intrigue? The drama? The 30+ books of character building? Gone with a swing of Odin’s Budweiser and a fight with a mud-monster.

But I digress. With the New 52, DC’s Dan DiDio stuck his neck on the line and said “this is what we need to do to shake things up.” And I whole-heartedly agree. But he chose to end the current continuity by way of one of those aforementioned epics, and then give all of us a do-over on his “One Year Later” trick. Remember that? And to boot, while countless writers sit on the sidelines waiting for a chance to shine, Dan hands himself a job on OMAC.

I’m curious. Did he pitch the book to himself? If the editors exist to challenge their artists and writers to make the best books possible, if the New 52 was supposed to exist to make it not only easy for new readers to jump in, but to hold the industry to a higher standard of quality. How do books like Voodoo, Hawk and Dove, Mister Terrific, and Grifter get published?

Furthermore, what about the books that were universally “meh’ed” like Red Lanterns, JLI, Catwoman, or Red Hood and the Outboobs? Did the editors really sit back at their desk with the assembled pages, and say “now here’s a book I am proud of” or did they just get the damned thing done and hope for the best?

Stay tuned next week, when all the ComicMix columnists will be editorially mandated to write on the same topic: Honey Badgers!