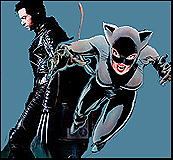 DC released Young Romance this week, using the title of one of the overlooked and (imho) underappreciated gems of comics history, the seminal romance comic that was created by Joe Simon and Jack Kirby and was published from 1947 to 1975. I’m old enough to remember many of the stories contained within those pages; they were attuned to the morals of the times, and regularly told tales of unrequited love, of compromised love, and of love triumphant.

The characters were easily identifiable: there was the bad girl, the bad boy, the good girl, and the good boy.

The bad girl (think Betty Rizzo in Grease) smoke and/or drank, wore too much makeup and perfume, wore incredibly slinky dress that didn’t leave much to the imagination, preyed on other women’s men, and was quite free with her, uh, favors. Not that anything was ever shown except for kisses, but somehow Simon and Kirby – especially Kirby with his magnificent art – definitely got the message across of what followed that forbidden kiss off-panel, even to a young and innocent girl like me.

I always rooted for the bad girl.

The bad boy (think Johnny Strabler in The Wild One) smoke and/or drank, rode a Harley or drove a wicked muscle car with fins, wore a leather jacket with a one-size-too-small undershirts and jeans, had a ducktail and a comb, dropped out of high school and worked at the gas station, and was always hot for the good girl.

I always wanted the bad boy.

The good girl was a secretary or a librarian or a nurse or a high school senior or a college freshman. She wore modest clothes and flats, pink lipstick, no jewelry except for her grandmother’s pearls, and never smoked or drank.

She was so boring.

The good boy was a doctor or a lawyer or an engineer or the BMOC (big man on campus) or the high school football team’s star quarterback. He wore a suit and tie or chinos and a windbreaker, never showed body hair, and always obeyed the speed limit in a Chevrolet or Oldsmobile – definitely your father’s car – and above all respected the good girl and would safely see her to the door after a date and say good night with a chaste kiss, saving “the act” for the marriage bed.

My preference for the “little bit of naughty” also made me veer towards those characters in the superhero world, caped and non-, that I imagined had some, uh, good times, when not saving the world.

I think Adam Strange’s relationship with Alanna moved quite quickly into intimacy, even before they were married. After all, Adam could not control when the Zeta-beam would either take him to the planet Rann or return him to Earth, so there was no time like the present, right? Though I do hope that that damn Zeta-beam didn’t snatch Adam away right at wrong time, if you know what I mean, for Alanna’s sake.

Certainly Sun Boy, a.k.a. Dirk Morgana, was an out-and-out roué: check out a little story called Triangle in Legion Of Super-Heroes #320, February 1985, a tale I dialogued over Paul Levitz’s plot, with artwork by penciler Dan Jurgens, inker Karl Kessel, letterer Adam Kubert, and colorist Shelly Eiber. But I always had a thing for Rokk Krin, a.k.a. Cosmic Boy. Maybe it was the black hair and the blue eyes, but there was just something about Rokk – I knew he was not above stopping by the 30th century’s version of the Bada Bing or hitting on the boss’s wife. And succeeding.

I know the newest couple in comicdom is Kal-El of Krypton and Diana of Themiscrya, but the pairing of these two, the classic “good boy” and “good girl” of DC, just doesn’t float my boat, y’know. Now Diana’s mother, Hippolyta… that’s a woman whom I suspect walked a bit on the wicked side in her youth. She just too worldly just knows life, with all its ups and downs, triumphs and tragedies, too well. It’s in the way she holds herself, the way she talks, the way she rules.

Lana Lang may have started as a “good girl” in Smallville, but I think once she left home she had some fun. Getting over Superman throwing her over for Lois, she let the “bad girl” come out in college, cutting classes, never missing a beer bash, smoking the ganja, and saying yes to whoever asked. As an adult she may be the “sadder-but-wiser-girl,” but damn, the woman knew how to party.

And of course there’s Selena Kyle, who brings home the bacon and fries it up in a pan. Hey, the lady knows what she wants. I’d like to see her paired up with Wolverine, the “bad boy” of comics. Hard-drinkin’, hard smokin’ Logan hooking up with Catwoman.