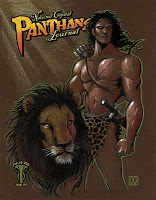 The National Capital Panthans, founded in September 1996, are the Washington D.C., Baltimore, Annapolis and Northern Virginia area Chapter of the Burroughs Bibliophiles. Meetings are generally held on the firs…t Sunday of the month and are hosted by various members in their homes.

There are approximately 50 members from around the United States and one each from England, Canada and Germany. The Panthans hosted the 1998 Burroughs Bibliophiles Dum-Dum, the 1999 and 2003 ECOF Gatherings, and will again host the 2006 ECOF in Rockville, MD. Generally so many members go to ERB fan conventions hosted by others that the Panthans can be counted on to assist with registration. The Panthans have published a book, entitled “ERB – The Second Century,” which includes fan-produced fiction, scholarly deductions and many great illustrations!

To become a member and receive a monthly newsletter informing you about Panthans activities send your annual subscription fee of US $15.00 to:

For further information check their Web site at: www.taliesan.com/panthans/cover.htm