MARC ALAN FISHMAN: UltraFish — What I’d Do Were Malibu Mine 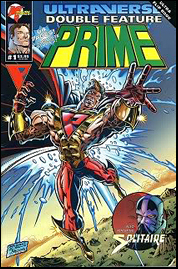 Welcome back to the Fishtopia, gentle readers. Once again, I’m refraining from dumping all over DC. I know, bold move. But boldness is what I’m known for. Boldness, being Jewish, and uhh… having a beard. I thought I’d tickle my fantasy bone today and open a door to a magic land. Come with me, won’t you? We open on a cool, crisp Chicago late afternoon. A chilly breeze blows through my thick beardly-locks. The lake air wafts past my nose, bringing with it the scents of a city. A hotdog dragged through the garden. Buttery deep dish pizza choked with cheese and sausage. Hipster-douchebags in knit caps, skinny jeans, and too much Old Spice. Ahhhh. I gaze longingly at the Lake. A lonely boat drifts in the distance. My iPhone rings. Oh! It’s Marvel calling.

Me: The Axe-Man! What’s the happy haps?

Them: So we just have to get you on the payroll here. It’s been too long!

Me: I know, I know. What do you have in mind? Another Slingers mini? Maybe Matt and I can knock out that Darkhawk book we keep pitching to you?

Them: Oh no, bubbala. I got something better. Something you’ve been dying for.

Them: OK Fish. Malibu. It’s yours.

At this point my legs go a bit limp. I find a bench. All is right with the world.

It’s no secret. I loved Malibu Comics’ Ultraverse. I owned nearly every book they published. If a genie were to grant me three wishes… bringing them back is the first thing I’d ask for (after world peace and a carb and calorieless Mac and Cheese). For those who aren’t familiar, let me dial up the pop-tart sized Wikipedia entry for you to wolf down before we proceed.

In 1993, a small publisher, Malibu Comics, decided to put out a line of superhero books. Hey why not, everyone else was doing it! The “Ultraverse” as it were, was a fun romp not beleaguered by decades of history (like Marvel or DC), knee-deep in boobs and guns (Ahem, Image…), nor entrenched in wads of super-science and hyper-continuity (like Valiant). Malibu’s line was just about the fun. Characters with barely believable backstories fighting baddies with a wide array of appropriated super-powers. As a 12-year old, I ate it up like a church group at a Sunday buffet. Yeah, I went there.

Fast forward to the mid-nineties… and sales dropped. Turned out all those issues of the Death of Superman weren’t worth thousands, and people were getting tired of counting the flaps of Spawn’s cape in a book of 17 splash pages. Marvel picked up the ashes of the now unpopular Ultraverse, and laid them to rest after a failed crossover. Ever since, I’ve wanted to grab those dirty ashes and reanimate them to their former glory. Here’s how…

Keeping things to their own li’l separate universe would be key. Call me crazy, but usurping an entire universe and rewriting continuity just to force a few has-beens into a modern setting seems like the dumb kid trying to wedge the square into the circle hole. Sound like anyone you know? Nah, me neither. Anyone here reading Voodoo and Grifter yet? But I digress!

I would make a batch of four or five books, akin to Marvel’s successful (turned boring, turned Jeph Loeb nightmare, turned interesting again) Ultimate line. A solid solo adventure book. A sturdy team book. Something to explore the fantasy/sci-fi angle. Maybe a nice villain-centered book. And then? A book with Wolverine in it. Hey, even in my wildest dreams, I need to sell some books. Allow me to pontificate.

My solo book? Prime. Here’s a character that begs to brought back. Taking the original Captain Marvel concept (a boy who can transform into a 20/30 something super-man), but adding a pinch of angst… makes this a title to appeal to teens and not-teens alike. Billy Batson is gee-golly-gosh cool. Seriously. I loved Mike Kunkel’s Johnny DC title. But we ain’t talkin’ about Billy.

Prime’s alter-ego is (was) Kevin Green… troubled youth. With a chip on his shoulder and an attitude problem, he’s the quintessential anti-Batson. Where a Peter Parker or Clark Kent have that “boy next door” charm, and a happy demeanor in and out of costume… Kevin is at that perfect age where he knows all the answers, and still can’t get girls to dig him. But when danger is afoot, he activates his liquid flesh power, and becomes the hyper-muscular Prime. Unlike a Marvel or Captain America though… Prime is instinctively still a teenager. He’s quick to anger. Quick to fight. And he’s powerful enough that no one is going to tell him otherwise, by force or not. Add in some crazy scientist arch nemesis and robots to trash? Maybe a love triangle where Kevin has the hots for a teen girl in high school, and a seductive Super Heroine as Prime? The book practically writes itself! Will Kevin lose his virginity to the super-slut, or save himself for prom? And how can he fight the evil mutant army, when he still needs to clean his room!?

How about a team adventure? Well, look no further than The Strangers. When a group of seven random passengers aboard a San Francisco trolley get hit by sentient alien lightning, they are imbued with super powers. They must unite to fight a mysterious eighth citizen who’s bent on taking over the city! OK, simple pitch aside, what I loved about The Strangers back in the day still holds true now. The pure oddity of powers given matched with completely dissimilar character types makes a book that never stops being fun for fun’s sake. The team is led by an art school student with Firestorm level matter-altering powers (and he doesn’t have the restriction of needing to know how to convert matter a la Ronnie or Jason). His best friend, a hot-head with a Guy Gardner level chip on his shoulder, is constantly trying to steal the spotlight. There’s a street urchin who’s more interested in using his super speed to score and sell drugs. A fashion designer who could care less about her new powers… she’s got a business to run. And did I mention the team has a hooker-android with electrical powers that may be remotely controlled by a mad scientist? What wouldn’t this book have people?!

OK, one more before I go. Mantra. For the sword and sorcery set who dig a little gender bending to boot. A warrior cursed to live eternally is reborn once more, after a thousand years… but this time, in the body of a woman! Having to acclimate himself to a modern world he’s not ready for, in a body he can’t get used to! It’s a fish out of water, with boobs. Marvel at Mantra as she fights against evil modern-day warlocks and demons… while trying to get the hang of sports bras and depilatories. Sex and the City meets Dungeons and Dragons, folks. Come get some.

Of course, you can’t actually get some. Malibu’s contracts were coated in leagues of red tape and legal roadblocks. Marvel tried to unearth the Ultraverse in 2005, but it go no further than a wish on the wind. And while no one of importance cared… I cried that lone American-Indian-on-the-side-of-the-road tear. Normally, I’d figure out a nifty way to end my column. A nice summation told via a pun or a wicked barb aimed at a worthy foe.

But I’m too sad right now. So I’m just ending with a bitter plea. Someone out there give me a million dollars, so I can go make this happen. No? You’re a bunch of jerks!