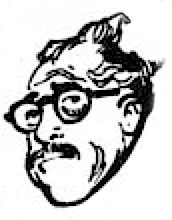 Back in 1937 a King Features Syndicate staffer was given the job of taking over the coloring and engraving their fairly new full-page weekly comic, Prince Valiant. It was a remarkable assignment; one that only a truly talented artist could perform. The job was given to a 19-year old named Jack Adler.

That assignment was his full work load: he had a week to do it, and given the complexity and beauty of Hal Foster’s work, Jack needed every minute of the work day to make his deadline. Given this workload and his youth, we can forgive him for making a politically incorrect faux pas. His boss was taking an executive on a tour; clearly, this executive was a comics fan who really new his stuff. He asked Jack all kinds of questions that were answered perfunctorily without the teenager taking his eyes off of his work. Finally, his boss cleared his throat and Jack swiveled around just in time to meet the executive’s glower.

The executive was the incredibly powerful William Randolph Hearst, the owner of the joint and a man used to deference. 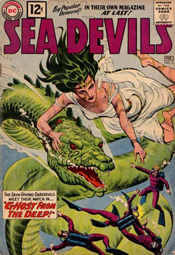 Jack Adler kept his job. That’s quite a tribute to his talent.

Adler went on to a career in comics that lasted for nearly a half-century. Teaming up with his friend Sol Harrison – the engraver on, among other projects, Superman #1 (the first one), the two revolutionized the world of comics color. They recreated the engraving system at the New York Daily News, they helped organize for the engraver’s union and they wound up at DC Comics. Continuing to color – particularly covers – Jack became assistant production manager in 1960 and was promoted to production manager when his boss, friend Harrison, became DC’s president.

Of all his work, Jack is perhaps best known for his wonderful wash covers in the late 1950s and early 1960s: Sea Devils, Green Lantern, Adam Strange, Challengers of the Unknown and others.

A passionate photographer, an audiophile and a watercolor artist, Jack was quite the Renaissance man. I used to joke that he invented papyrus; he thought it over and said no, he would have invented a paper that would absorb color more efficiently. 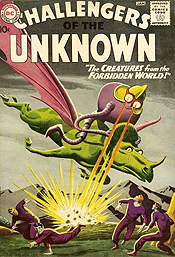 Jack was saddled with all kinds of allergies and medical conditions and, during his final days at DC, needed help to get through the workday. But he still hung on and was a frequent advisor to a number of so-called independent comics publishers; Adler gave me all sorts of suggestions when we were doing the original First Comics.

Oddly, he might have been better known outside of the comic book donut shop because his cousin, Howard Stern, mentioned him frequently on the air.

Jack Adler passed away Sunday night at the age of 94.

Stern dedicated the opening of Tuesday show to his “super cool Cousin Jack,” calling him a “genius” photographer who supported his passion by becoming a comic book artist.

I called Jack Adler my friend.