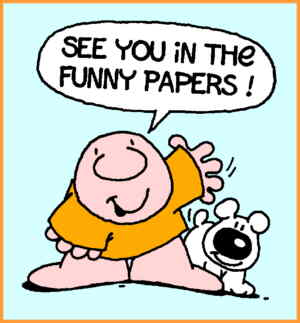 Tom Wilson, the creator of the comic strip Ziggy and artist from 1971 to 1987, passed away in his sleep last Friday at the age of 80.

Wilson’s career began in 1950 doing advertisement layout for Uniontown Newspapers, Inc. In 1955, he joined American Greetings as a designer, becoming Creative Director in 1957 and vice-president of creative development in 1978. While at AG, he developed the Soft Touch greeting card line. He also served as president of Those Characters From Cleveland, AG’s character licensing subsidiary.

Ziggy first appeared in the 1969 collection When You’re Not Around, published by American Greetings. The newspaper strip began in June, 1971. He retired from the strip in 1987 and the strip was continued by his son, Tom Wilson, Jr.

Ziggy was licensed in a wide variety of forms, including greeting cards and calendars, and an Emmy-award winning Christmas special called Ziggy’s Gift: