The Secret Origins of Bobby Nash
by Joshua Pantalleresco

ALL PULP had a chance to talk to Bobby Nash about his works in both comics, his pulp origins and some of his upcoming projects.

AP: How did you get into pulp? Was it something you always saw yourself doing?

I had never thought about writing pulp per se. I was certainly a fan of pulp and pulp-style stories and I certainly wrote things in that vein, but I didn’t think about doing an actual pulp tale until Ron invited me to participate in what became Lance Star: Sky Ranger. That was back in 2005 after we met in person at Dragon Con in Atlanta. The rest, as they say, is history. 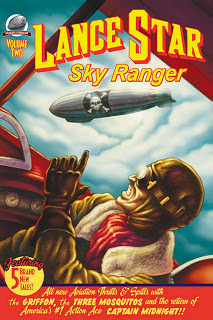 AP: I notice you’ve done properties created by other people, like Fantastix and Lance Star. What are the challenges that you face doing books like them in comparison with your own creations?

BN: Sometimes it’s easier than others, but writing pre-existing characters or characters that are owned by a publisher adds an extra set of eyes to the work. As a writer it’s my job to make sure the characters stay true to the vision of their creators. There’s a give and take that happens because there are things I may or may not have to do to keep continuity, but the publisher also allows for my style to come through the process as well. That feeling of collaboration can add whole new layers to the work.

AP: What are you working on right now? 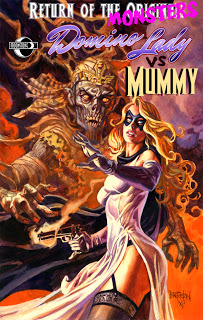 BN: I’ve always got a few irons in the fire. Currently, I’m working on a comic script called Operation: Silver Moon with Rick Johnson, doing post comic script work on Bloody Olde Englund with Jason Flowers, and Domino Lady Vs. Mummy with Nancy Holder, Rock Baker, and Jeff Austin. In the next 3 – 4 weeks I’ll be working on short stories for various anthologies like The Danger People for New Babel Books, Blackthorn: Thunder of the Barbarian for White Rocket Books, Green Hornet: Still At Large for Moonstone Books, and The Wraith for Airship 27. Plus the usual bits for All Pulp, New Pulp Fiction, Lance-Star.com, and BobbyNash.com. There are other things as well. I bounce around quite a bit as deadlines approach.

AP: Can you tell a little bit about your first novel Evil Ways? 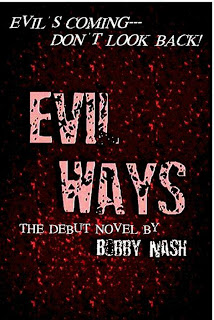 BN: Evil Ways is a mystery suspense thriller about a serial killer stalking a select group who have returned to their small North Georgia hometown for their ten year high school reunion. Also in town is FBI Agent Harold Palmer to visit his brother who owns the local newspaper. The Palmer brothers are pulled into the investigation to help the beleaguered small town sheriff who is out of his element.

Evil Ways started out as an experiment. I’d started the plot as a screenplay for a friend of mine who was interested in filming a movie. I wrote the script with real locations where I knew we could film. When that fell through I took certain parts of the script and reworked it into Evil Ways.

Evil Ways was my first published novel. Sadly, as of August 1, 2011 it is currently out of print, but I have been discussing getting both Evil Ways and its sequel, With Evil Intent released. Fingers crossed that will happen. I would love to continue writing Harold Palmer thrillers. Keep checking in at www.bobbynash.com for updates.

AP: Do you have a preference between prose and comics?

BN: Not really. It’s like prose writing and comic writing each works a different creative muscle so it’s hard to compare them. Writing comics is certainly a bit faster because a good bit of the work is shared with an artist, but each has its own unique challenges.

AP: What has been your favorite story to date?

BN: Wow. That’s a tough one. It’s like choosing between your children. Each book holds a special place in my heart, but Evil Ways stands out because it was my first published novel. I had a lot of starts and stops and with Evil Ways I wanted to prove I could finish a novel. The fact that people have read and enjoyed it was just icing on the cake.

Lance Star: Sky Ranger would be a close second because it really did send my writing into another area and it’s gotten some interesting notice as well.
Share