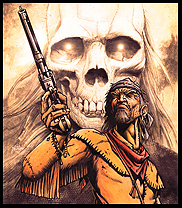 As predicted, I had a swell time at the Baltimore Comic-Con. Lots of friends, lots of fans, and lots of attention from the best convention crew I’ve ever seen. The editorial we had a few fun experiences we’d like to share.

I bopped around the show carrying a cane. I don’t really need it, but since I was on my feet in a crowd for a couple days I thought bringing it would be a good idea. Besides, at any comics convention I can never tell when I might need to bash some head-slapping backpack donkey. Several people asked about my unconcealed weapon, including cosmic comics superstar Jim Starlin.

I told Jim I blew out my back in his hometown of Detroit. He sympathized and then one-upped me. He screwed up his back in South Africa, at a funeral, at which he was a pallbearer. When a breeze wafted by, the pallbearer in front of him lost his yarmulke and left his responsibility to go fetch. The weight of the coffin shifted over to Jim, and that screwed up his back. O.K. Jim wins.

At 88, living legend Stan Lee gets more attention from women than a 1960s movie spy. At least three-quarters of the men at the show were jealous, including those who were happily married. And including me. I was particularly amused at his lustful glowering at my daughter.

Mark Wheatley took me to a place purposed (by comics fanboy and teevee star Guy Fieri) to have some of the best pit beef in the nation. It’s a wonderful shack called Chap’s and it’s next to a strip club on Pulaski Highway. Both Mark and Guy are right. The place kills. This wasn’t the highlight of the convention for me, but it made my Top 10 list.

Mike Grell introduced me to his former assistant on [[[The Warlord]]], a woman who used to be married to the brother of Brother Grell’s ex-wife. Beverly Derouin was extraordinarily pleasant, particularly after Mike explained the etymology of their relationship. That’s really cool. Particularly in an environment that can be a bit overwhelming.

Timothy Truman and his son Ben were hawking their upcoming series Hawken. If it is half as fantastic as the t-shirt they were selling (and I should have purchased, damnit), this series will be absolutely fantastic. As well it should be, given its high pedigree.

I got a chance to tell Dean Haspiel how much I enjoyed [[[Cuba ­– My Revolution]]], one of my favorite projects of the year. It was written by Inverna Lockpez, and if you haven’t read it yet, you’re making a very, very serious mistake. It’s the best graphic novel I’ve read since Stagger Lee. Outside of those I’ve edited, of course.

The drive from Connecticut to Baltimore takes about four hours, which is how long it took for us to drive down last Friday. The drive back took eight and one-half hours, virtually all of which were spent on the New Jersey Turnpike. That road hasn’t been the same since Simon and Garfunkel broke up.

As always, I want to thank Marc Nathan and his unbelievably professional crew for putting on another great show, to Mark and Carol Wheatley for putting my daughter Adriane Nash and me up – as well as putting up with me – and to the aforementioned Ms. Nash for her assistance and companionship during the show and for sharing with me my proudest moment in my comics career.

I’ll be at the Baltimore Comic-Con next year. You should be, too.

(ComicMix editor-in-chief Mike Gold annoys the masses with his Weird Sounds Inside The Gold Mind rock’n’blues radio show, which streams four times a week on www.getthepointradio.com and is also available on demand at that very same venue. He also pens a very political column at Michael Davis World – http://mdwp.malibulist.com/ — where he joins ComicMix columnists Martha Thomases and Michael Davis.)