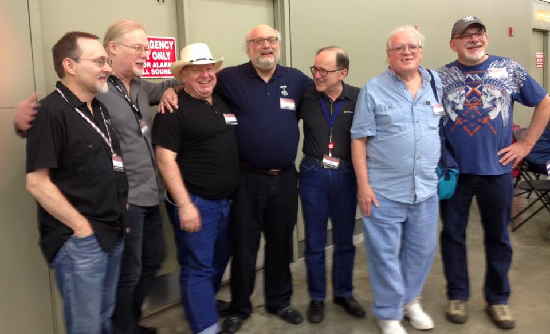 Emily, Martha, John and I were joined by fellow ComicMixers Glenn Hauman, Ed Catto, Bob Ingersoll, Robert Greenberger and Evelyn Kriete, all in a combined effort to make Adriane Nash feel bad that she missed a big one. I believe Nelson Muntz said it best: Ha-ha!

Let’s identify the folks in Hilarie’s picture, from left to right, physically but not politically.

It was about 34 years ago when Rick Obadiah and I were, literally, lying on the floor of an office in the mighty Video Action Magazine complex with our sketches and notes, detailing what was soon to become First Comics. The act of creation takes on many forms and an enormous amount of time, and Rick and I further developed the company through a wonderful series of elaborate restaurant meals that would provoke a vegetarian to a massive seizure. I know that it worked – actually, I’ve finally accepted that it worked – because dozens and dozens of people still stop me at comics conventions such as the Baltimore Comic-Con to tell me how much they enjoyed our work.

Yes, and more than a handful of fans whose introductory sentences started with “I discovered my dad’s comic book stash and…” Sigh.

The above-pictured people were responsible for Mars, Jon Sable Freelance, Starslayer, E-Man, and GrimJack. Our work either remains in print in trade paperback form or, as in the case with Starslayer, about to be so memorialized.

I am not alone in saying that the Baltimore show is my favorite, and that it is my favorite because it’s by and for comic book fans. There aren’t many faded teevee stars there eking out a living; it’s all four-color, all the time. A celebration of what makes comics and comics fandom great. It’s also the home of the Harvey Awards – John and I were presenters this year – and as Martha will tell you Friday, the Harveys is all about family.

The combined age of all those guys up above is about 400 years old. Please note: all of us are still working, and still turning out great stuff. In many cases, better stuff. And signing all those comic books (sometimes in front of a CGC witness!) and chatting with you-all remains completely… what’s the word you kids say?… oh, yeah. Awesome.

For that, I thank you.