Review: ‘The Number’ by Thomas Ott 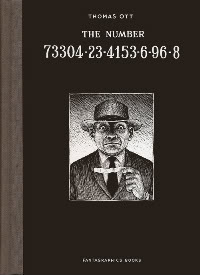 Those repeated numbers create a cadence to the book, a dark rhythm drummed into readers’ heads that’s further instilled through Ott’s consistent use of four panels per page.

The wordless story follows a prison executioner who discovers a slip of paper marked only with the previously mentioned number. As the man notices bits of the number turning up in his life, he decides to place his fate in the number, taking it for a wild ride of good luck.

But after a night of gambling success, the man wakes to find the dream turned ugly, and the number only leads him farther into darkness.

It’s not terribly difficult to predict where things end up — after all, the book begins with the quotation “Good people are always so sure they’re right,” from a woman who was executed in prison.

The worthiness of the book lies instead in the way in which Ott unspools his protagonist’s demise. The story moves along briskly, and Ott transitions effectively from the sedate beginning into the surreal and terrifying conclusion.

He uses scratchboard to perfection, carving fully detailed scenes with lighting that looks, at a bit of a distance, as if it’s a black and white photo. His characters all pop into three dimension, they’re so effectively crafted.

So as you read quickly through the book it feels like a photo album, but Ott’s art calls for a second reading, to marvel at every panel. Brilliant stuff.

It’s all set onto black pages, which only further accentuates the tale of a good man’s fall into madness.