Mike Bullock-TAKING ON NEW PULP WITH A VENGEANCE

Mike Bullock is fast becoming one of the most prolific New Pulp writers today. His work has ranged from comics like the Phantom and Black Bat to prose stories like Death Angel. All Pulp spoke to Mike on what is currently going on with his comics, his prose and to talk about his influences in general.

ALL PULP: Have you always wanted to write pulp stories? 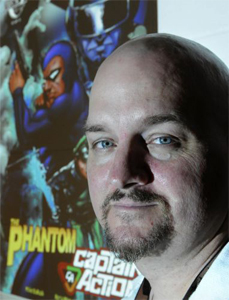 Mike Bullock: Yes and no, I guess. I’ve wanted to write since I was four years old. I discovered pulps when I was ten or eleven when I walked into a book store and saw Michael Whelan’s cover for “A Princess of Mars.” That cover captivated my senses and to this day it’s one of my favorite pieces of sci-fi/fantasy artwork. I’d already been a comic book junkie for as long as I could remember at that point and pulps seemed, to me at least, a natural progression of that love. Action-packed, speculative fiction where imagination was the only limitation to where the story could take the hero and that really spoke to me. It wasn’t much later when I realized people actually wrote for a living and that’s when the proverbial light bulb went off over my head.

AP: What writers have influenced your work? 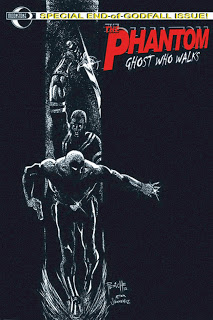 AP: Will we ever see you do the Phantom again? I enjoyed the run, and I’d love to see you tackle a one shot or special again.

MB: I certainly hope so. I felt like I was just hitting my stride when I found out Moonstone wasn’t going to renew the license. I still have a pile of Phantom story ideas sitting on my hard drive and rattling around in my head and each one I read through sparks new ideas. I certainly wasn’t done kickin’ it in the Skull Cave and God willing the opportunity to go back will present itself in the future. Thankfully, Phantom artist Silvestre Szilagyi and I are working on another pitch together, so I’ll get to work with Sil again if nothing else.

AP: Looking back on your Phantom run, which story are you most proud of? Are there any dangling threads you wished you could have finished?

MB: I don’t know that I’m necessarily proud of any of it, but the one that brings the closest thing to satisfaction is the “Checkmate” arc. If I hadn’t had to abridge the final arc in Ghost Who Walks, that might be my favorite. Looking back, “Final Roar”, which oddly enough ended up being the last Phantom story printed by Moonstone, is the one I believe is the best Phantom tale I wrote, though. I also miss working with Silvestre and Fernando on Phantom tales, but thankfully, Fernando and I are doing Joe Palooka together now. As for dangling threads, there’re quite a few. My original goal with the Ghost Who Walks series was to hit issue 75 before I’d step down from it, so I was laying a lot of ground work for things to come throughout the twelve issues of that series.

AP: You have four prose books coming next year. Does that mean you won’t be doing any more comics for the time being? Why the emphasis on prose?

MB: Well, I actually have several comics/graphic novels coming out over the next eighteen months as well including all three “Lions, Tigers and Bears” graphic novels (volume III for the first time and vI and II for the first time in the new format). The focus on prose is something that’s been coming for a long time. I was writing prose and poetry long before I was fortunate enough to do comic books, so going back to that just seems to make sense. I do hope that I can take these prose novels and have them adapted to comics, however. I think “Runemaster” especially would make a great comic series. And, Death Angel debuted as a New Pulp hero in comic books, so it’s not like I view the two formats as mutually exclusive.

AP: Can you tell me something about Lions, Tigers and Bears vol. 3 that hasn’t been said elsewhere?

MB: It’s the coolest book you’ll ever buy in your life. In fact, it’s so cool, you should buy dozens of copies and pass them out to random strangers to increase your own personal happiness quota as doing so prevents cancer and immunizes you from chronic frowning. Don’t know if that’s true, but I don’t think it’s been said elsewhere. On a more serious note, it has some truly amazing art from Michael Metcalf, Adam Van Wyk and Dan Hipp inside. That’s worth the price of admission alone, if you ask me.

AP: Any other graphic novels/comics you can tell me about?

AP: Fiefdom of Angels. Sounds cool. What’s it about?

MB: The first war. Ever. Brought to life from a story created by Grammy Award Winner Kevin Max by myself and artists Tyler “Dungeons & Dragons” Walpole, Peter Mohrbacher and Rob Schwager.

AP: Let’s talk about your books. First off, The Runemaster. I read the premise and am intrigued. Who is he? And what is the novel about?

MB: The Runemaster is his tribe’s leader and holy man of sorts; the character given that designation is Skarl Kirwall, a young man preparing to take over the mantle of Runemaster from his father. Mere weeks before the responsibilities are passed down to him, he’s betrayed by a fellow clansman and exiled while his father is away at a summit of all the northern clans. Skarl seeks a meeting with the clan elders to allow him back in to the Kirwall village on the day his father is to return. But, when he arrives that morning Skarl discovers the entire village has been ransacked, his father murdered and his love taken to be sacrificed to a demon worshiped by the hated Yslings. Now, it’s up to Skarl to save her and avenge his clan.

The novel is the first in a projected series from Airship 27 that will hopefully feed the hunger of those looking for New Pulp sword and sorcery adventures. 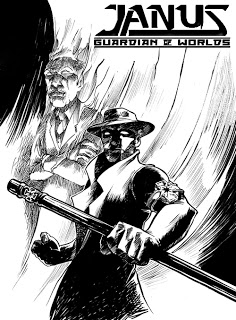 MB: Janus is a legacy hero of sorts coming from Pro Se Press. The character is always two people, the ghost of the grandfather acting as mentor and sidekick to the living grandson. Armed with a totem staff and armband that provides them with the ability to draw on an ancient arcane power source, they’re charged with guarding our world against invasions from those beyond.

AP: The third book I saw forthcoming was Death Angel. I saw that the first prose story I could find for it was on iPulpfiction.com. Explain a bit about Death Angel and how it came to be?

MB: Death Angel is an evolution of a character I created a long time ago called Revenant. After creating that character to tell some street-level super hero tales, I discovered there was several other characters named Revenant in comics and I didn’t want to just toss one more onto the pile. So, I set it aside for awhile, then when Joe Gentile over at Moonstone Books and I first dreamed up the Moonstone Pulp universe, I dusted off the old Revenant character and injected it with a whole new life, new origin, new name and new set of motivations. Michael Metcalf came aboard to handle the art chores and he really brought the image of Death Angel to fruition with his more experimental style that those who are familiar with his all-ages work never saw coming. 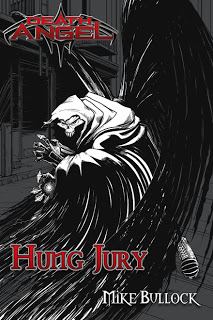 After Death Angel debuted in the pages of “Phantom: KGB Noir”, the feedback was overwhelmingly positive which led to doing more and more with the character, including the tales that saw the light of day in the first Black Bat graphic novel. Once I discovered iPulpfiction, the desire to do something of a serial nature infiltrated my mind and Death Angel seemed like the right character to explore that. I turned in the second story to iPulpfiction a few days ago and it should be available on the site in August some time.

AP: Did doing books like the Phantom and Savage Beauty teach you anything with how to develop your own properties in the sense of world building?

MB: Not really [Laughs] I’m not that smart. I built the Savage Beauty world from the ground up and did inject some of what Lee Falk did in Phantom, but I’m not sure it was a learning experience, per se. It was a lot of fun, however. The most gratifying thing about the world building is watching others take the ball and run with it, like artists Dave Hoover, Mark Wheatley, Thomas Yeates, Paul Gulacy and Jose Massaroli. It’s one thing to rattle all these ideas and images around in your mind, it’s a whole new level of ‘kid at Christmas time’ to see high caliber artists bring those ideas to vivid, living color. 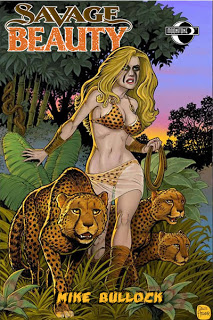 AP: What do you prefer, working with older properties like Black Bat or The Phantom, or your own creations?

MB: That depends on the time of day [laughs]. It’s nice to be able to switch back and forth as the muse guides me. Ultimately, I’d rather work strictly with my own creations, but there’s a great deal of joy to be had playing with other people’s toys. When I wrote the Phantom for all those years, I didn’t need to wrestle with the world-building, as Lee Falk had already done that, and done it masterfully, for me.

There’s something to be said about running with the excitement that other writers ignite in your heart. For instance, I’d love to write Moon Knight or Conan and I greatly enjoyed penning Phantom tales for seven years. But, if I had to choose, I’d stick with my own stuff.

AP: This is the last question of the interview. Say anything you want here.

MB: I’ll resist the urge to say “anything you want here” as that joke’s ship has sailed. I would like to encourage people to invest in imagination. Yours, your family’s, friend’s, anyone you encounter. Imagination is the key that unlocks a bold new future, so don’t lose it, leave it behind or forget to use it every chance you get.