Readers of ALL PULP saw it announced here first.  An initiative to bring creators and publishers of what many consider the modern version of Pulp fiction together under one banner, a branding plan that would make Pulp publishers and creators easily identifiable, regardless if it was a Western pulp tale or a sci fi pulp opus, something that would link these various modern Pulpsters together.  A way to advertise, to unite, to push what Pulp is today without concerns of competition, sales, and who writes what for who.  A true recognition of ‘If it helps one of us, it can help all of us.’ that was first expressed in a statement on ALL PULP and not only gained quick support, but led to a brand that is now sported on books from various publishers, including Moonstone, Airship 27, Pro Se Press, Pulpwork Press, and others.  A brand and an idea that has grown quickly into a Movement.

In an effort to capitalize on the support and involvement New Pulp has garnished since the man who initiated the organization of the Movement, Tommy Hancock, announced it, Hancock announces today a next step in the evolution of New Pulp.  While in many ways nothing will change, in other areas, improvements are being made and plans moving forward to insure that the New Pulp Movement isn’t just something among like minded fans, but a major part of literature and social consciousness.

“New Pulp is still New Pulp,” Hancock states, “just as it was outlined in my original statement and just as its sort of organically developed since then.   It’s that development, that growth, that has sort of spurred the next step.  We could let New Pulp basically remain this open source thing that just anybody can pick up and use as a brand on their products and have a ‘New Pulp’ project here and there and most likely it would limp along forever and be okay that way.  But that’s not what this whole thing was about, jsut sort of doing it halfway.  It’s about getting recognition for creators and publishers of modern Pulp.  It’s about increasing awareness, readership, and involvement in New Pulp, so creators can get their stories told, publishers and producers can get their product sold, and society as a whole can experience some of the best durned literature for the masses anyone could read.

“What’s going to be happening as far as the Movement is concerned is some extra hands have been brought on and given formal positions within New Pulp to help facilitate more exposure, more material, more chances for New Pulp and all of us involved to get noticed, and more ways to make any creator’s or publisher’s association with New Pulp a positive and successful experience.  One thing New Pulp is committing to is that New Pulp will attend all three major Pulp Cons next year-Pulp Ark (The only official New Pulp Convention’Conference), Windy City, and Pulpfest.  Also, since people pretty much have already been asking me before they can use the New Pulp logo, that’s a practice we’re going to formalize for a couple of reasons.  One, so we can keep up with everybody who is involved in New Pulp and two, so we can at least have a say in quality control and make sure that the New Pulp logo is being applied appropriately.  It’s still free and being a part of the whole New Pulp Movement still doesn’t require you to take on extra work (unless you want to help out) or to sign your first born away.   This is just part of the evolution.”

Provided below is the roster of Staff of the New Pulp Movement.  Hancock points out that, “This list is incomplete, although that’s only by one or two spots.  And there can be more of almost everything on here as well, so if you want to help out, we can put you somewhere.  But remember, even when we start selling merchandise or producing books or whatever, that money doesn’t go into anyone’s pockets.  It goes back into New Pulp or to a charity New Pulp has partnered with.” 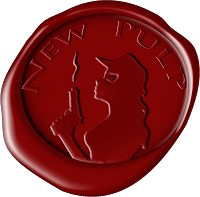 The New Pulp Movement also has a Staff of Advisors, a board of three that will provide advice and insight to Hancock as needed and provide a vital support in that fashion.   Two of the three positions have been selected and accepted.

“New Pulp is about the creators and publishers that make it up,” Hancock states.  “We’re just trying to make it something they benefit from and are glad they are a part of.”

Anyone interested in helping out with New Pulp or using the New Pulp logo can email Hancock at proseproductions@earthlink.net