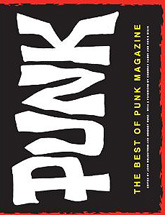 Like many old people, New Year’s Eve makes me remember earlier times. When I was young. When I knew who the new bands were. When I was cool. Once one has children, one is never cool again.

There was a period of time in the mid-1970s when I dropped out of college and went to work for an antiwar magazine. We had a barter arrangement with lots of underground newspapers and magazines, so I got to read CREEM magazine, and from that and the Village Voice, I knew who all the cool bands were and where to see them in New York.

When I decided to go back to college for my degree, I kept up subscriptions to CREEM and the Voice, and it was from these that I discovered Punk.

Not the music, although also the music. No, I mean Punk, a magazine that combined my two greatest passions, comics and rock’n’roll.  It was hand-lettered. It was rude and crude and hilarious. I so wanted to work there.

After I graduated, I moved to Manhattan and tried to get a job in journalism. I applied at straight places, like Time-Life, Condé Nast and Hearst. And I walked into the PUNK office, then on Tenth Avenue, to see if they would hire me. When I said I had worked for an antiwar magazine, Legs McNeil, the Resident Punk, leaped on top of a desk, pointed at me, and yelled that I was a Commie.

That didn’t stop them from letting me do some typing for them, when they needed labels for a mailing. And it didn’t stop me from becoming friends with Legs and John Holmstrom, the editor.

John is, in my opinion, the most ripped-off man in comics. I mean, lots of early comic book creators were screwed financially by their publishers. And lots of early comic book creators have been imitated by the artists who followed them. John, however, created a style that was part Harvey Kurtzman (a mentor of his), part Bazooka Joe, part Basil Wolverton, but uniquely his own. In no time at all, and with not even an acknowledgement or thanks, he was co-opted by every art director at every publisher and every ad agency in the world.

But John was more than an innovator. He was a great patron of new talent. Not only did Punk do stories on new bands, but they published work by new cartoonists. For example, John was one of the first person to publish Peter Bagge.

It has long been my contention that the comics and rock’n’roll share the characteristics that both are uniquely American art forms, but only gained respect when English people did them. John combined them in astonishingly simple ways, by drawing his interviews, or staging fumetti stories that starred Richard Hell, Debbie Harry, the Ramones and Andy Warhol, among others.

It’s not just nostalgia at Auld Lang Syne that has me thinking about how cool Punk was. Harper Collins has just published a big, beautiful hard cover volume, The Best of Punk Magazine that brings those late 1970s/early 1980s days back to life. It’s on much slicker paper than the original, but it still has the brattiness that made the original so much fun.

It’s a book that will get up on a desk and yell at you, and then bum money for cigarettes and beer.