Review: ‘Dark of the Sun’ 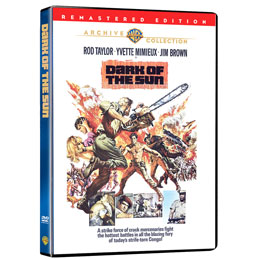 Given the unrest across Africa today, it’s easy to forget that there was similar troubles as country after country gained their independence from colonization in the 1950s and 1960s. The Congo crisis, in particular, lasted from 1960-66 as it struggled to establish itself after Belgian rule. Over 100,000 people died during the ordeal and it inspired a 1965 novel, [[[The Dark of the Sun]]], by Wilbur Smith.

The novel, rather than the actual events, led to the 1968 MGM film adaptation which is finally available on DVD from Warner Archive. The film has been a favorite of directors including Martin Scorsese and Quentin Tarantino who lifted some of the score, and its lead Rod Taylor, for use in last year’s [[[Inglorious Basterds]]].

Taylor plays mercenary Bruce Curry who is hired by the iron-fisted president Ubi (Calvin Lockhart) to retrieve $50 million in diamonds from the northern country. Accompanied by his Congolese friend Ruffo (Jim Brown), Curry extracts a fat pay day and agrees to rescue the “unfortunate Europeans” stuck in a town about to be assaulted by the rebel Simbas. Curry and Ruffo are longtime allies and their equal partnership is a rarity in its day and about the only good thing to come from the flat script by Ranald MacDougall (as Quentin Werty) and Adrien Spies.

In the hands of the acclaimed cinematographer turned director Jack Cardiff, the movie has a roughhewn feel, matching the African land (although it was shot in Jamaica). Unfortunately, the script and performances don’t live up to the potential. Curry is a dull hero and every obstacle in his path feels perfunctory. There are complications from the former Nazi Henlein (Peter Carsten) who wants the diamonds for himself and chafes under Curry’s orders, a safe on a timer, UN peacekeeper fire, and reluctant-to-flee nuns.

Even Jacques Loussier’s score feels familiar. One of the first acts Curry performs is rescuing Claire (Yvette Mimieux) from her burned out home, but then there’s nothing for her to do but look pretty and concerned for the rest of the film. There’s also the alcoholic Doctor Wreid (Kenneth More) who gets his one moment to shine and that’s it.

The best moments, although they feel forced watching it today, as the conversations about race and life between Curry and Ruffo about midway through the movie before the action ignites and remains a relentless presence until the end credits. Much was made of the violence when the film was released because such brutality had rarely been seen on the screen at the time. Beyond the usual shoot ‘em up stuff, the Simbas invade the town, raping and pillaging with wild abandon. It’s perhaps the truest depiction of what must have happened across the land and continues to this day.

The 101 minutes plod along until we get a fairly predictable ending.  The transfer holds up and film students will probably enjoy studying this. The rest of you have to be truly interested in the subject matter or cast to bother sitting through this.