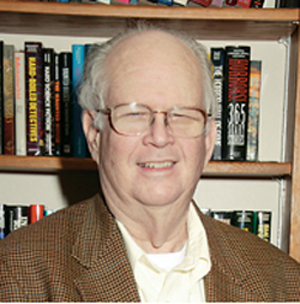 Martin Harry Greenberg, the leading anthologist and packager of short science fiction, fantasy, and superhero prose stories, and senior editor of Tekno Comix, died at his home in Green Bay, Wisconsin on Saturday. He was 70.

Marty’s output was staggering– here’s one partial list of the books that he actually received credit on, and here’s another. Notice how little overlap there is between the two lists, and there are hundreds more where he did back end editorial, production, or most often financial work. Marty’s packaging company, Tekno Books, produced over 2,000 books since its creation, with more than 55 New York Times bestselling authors. His collaborators have included the likes of Tom Clancy, Dean Koontz, Nora Roberts, Deepak Chopra, Robert Silverberg, Jane Yolen, Esther Friesner, Ed Gorman, and the late Isaac Asimov. In the 90s, he lent his corporate name and expertise to Tekno Comix. He packaged the Further Adventures Of series of short story collections featuring Batman, Superman, Wonder Woman, The Joker, The Penguin, and Catwoman for Bantam Spectra in the 90s.

He is the only person to have won the Milford Award for science fiction editing, the Ellery Queen Award for mystery editing and the Bram Stoker Award for supernatural horror editing. He also received the Prometheus Award in 2005 and was one of the first recipients of the Solstice Award in 2009. He was also a professor of political science at the University of Wisconsin-Green Bay from 1970 until his retirement in 1996, where science fiction was often used as a teaching tool.

Like almost everyone else in science fiction, I’ve received a check from Marty at least once in my life on a book I didn’t even know he was involved in. He will be missed.