Lord of the Rings Extended Edition 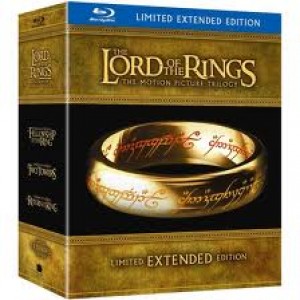 Let’s stipulate upfront that Peter Jackson’s adaptation of J.R.R. Tolkien’s Lord of the Rings may be as perfect an adaptation of the source material as we are apt to get in our lifetimes. From the casting to the visuals to Howard Shore’s amazing score, this movie was a monumental achievement well deserving of its accolades and box office success.

We thought the theatrical releases were stunning until we saw the extended editions released on home video, complete with new bridging score music from Howard Shore so it all feels seamless and not at all tacky. Apparently, Jackson doesn’t consider these to be his director’s cuts or even his final word on the subject, but unlike George Lucas doesn’t appear to be making a career out of tinkering with the trilogy.

Last year, Warner Home Video gave us the theatrical trilogy on Blu-ray and we appreciated them, especially for their extra features on the making of the film, but we wanted the longer, fuller, more complete versions and finally, that day has come. The handsome box set arrives Tuesday and is well worth the investment.

There are three cases within the golden box, each containing two-disc versions of the extended edition along with three discs of bonus features.  That’s 15 discs, over nine hours of movies and over 26 hours of bonus material. Try streaming that.

Jackson and co-writers Fran Walsh and Phillipa Boyens boiled the story down to Frodo Baggins returning the One Ring to Mordor where it would be consumed in fire. With that as their through-line, they made the necessary adaptations such as excising Tom Bombadil and Glorfindel, and rearranging lines and sequences to maintain that focus. To Tolkien, he was world-building and mythmaking focused more on lore and language than on characterization, which is where the filmmakers exceeded the source material. They had assembled a stellar cast that bonded in a unique manner allowing material to be tailored to give everyone a little more to do. We, as longtime readers of the material or new to Middle-earth, were taken on a journey that left us wanting more regardless of how long we had been sitting in the theater or living room. That’s a sign of success.

By not cramming the longer films onto single discs means Warner had the ability to ensure the highest resolution and fidelity. The crispness of the color and detail is a marvel. Now, among the video afficianados, there’s apparently been a debate over Jackson director of photography Andrew Lesnie having gone in to color correct sequences in The Fellowship of the Ring. These details would probably not be noticed by the vast majority of viewers and speculation has it that Jackson insisted on these changes because it would align this film closer to 2013’s first half of The Hobbit: An Unexpected Journey.  If you care, you can compare both versions of the Blu-ray discs and decide if you care. Now, compared with the standard DVD of the extended film, you will see a vast visual improvement. The shadows and saturation are superior here.

Thankfully, the audio is as improved as the video and together they make for a stunning viewing experience.

The exhaustive number of extras contain everything from the previous edition plus some—all in standard definition. There are numerous audio commentaries that delve into every detail while the cast talk about wear the appliances and costumes, wielding the weapons, and making magic. .Jackson arrives to introduce The Appendices, a six-part journey through the films.

Meantime there’s a From Book to Script feature for each film which talks about the adaptation process. Weta gets lots of attention and it’s a testament to their skill in finding, training and keeping their staff focused on the years-long production process. Considering every link of chainmail, every prop, every costume, and so on had to be fashioned from scratch, the finished product makes this feel like another time and place.

Perhaps the best realized CGI figure in film to date, Gollum, takes center stage in The Two Towers’ extra “Gollum”, a four-part, 44 minute exploration in how Andy Serkis made Smeagol come to life and how Weta made him believable.

Editorial: Refining the Story covers how each film in the trilogy was edited and how performances and sequences were enhanced thanks to judicious trims here and there.

The post-production visual effects, scorning sessions and the like all take their turn in the spotlight.  There’s even 12 minutes devoted to the color corrections made for video. The Music and Sound for each installment is also carefully reviewed. Return of the King features the welcome “Home of the Horse Lords” given the frequent use of steed throughout the epic.

Each movie also comes with a Middle-earth Atlas so you can trace the path of the characters. For example, in Fellowship¸ you can trace Frodo or Gandalf’s path complete with clips to orient the viewer.

Fortunately, the extras are not just about bringing Middle-earth to life but also how a trilogy was made overnight and the cats is particularly candid about what it took to maintain their level of energy. John Rhys-Davies talked about how script revisions arrived with such regularity; he sometimes was too tired to open the envelope, knowing more changes would be along soon enough.

There’s a piece looking back at how each film was received by the public with some reflections from Jackson, cast, and crew.

Costa Botes’ 85-minute documentary, lifted from the Limited Edition DVD, appears on its own disc for each feature.

Each film’s extras discs include a promo for The Lord of the Rings: War in the North – The Untold Story and once would have been enough.

Previous Easter Eggs remain hidden in plain sight and if there are new ones, I have yet to find them.

Honestly, if you loved the film in the theater this is a Must Have collection. The films alone are worth the price of admission but the extras remind you of how art can be beautiful and commercial without compromising one for the other. If there really was a Middle-earth, this would compel you to vacation there, but since its Tolkien’s legacy, this will have to suffice. And boy is it entertaining time and again.