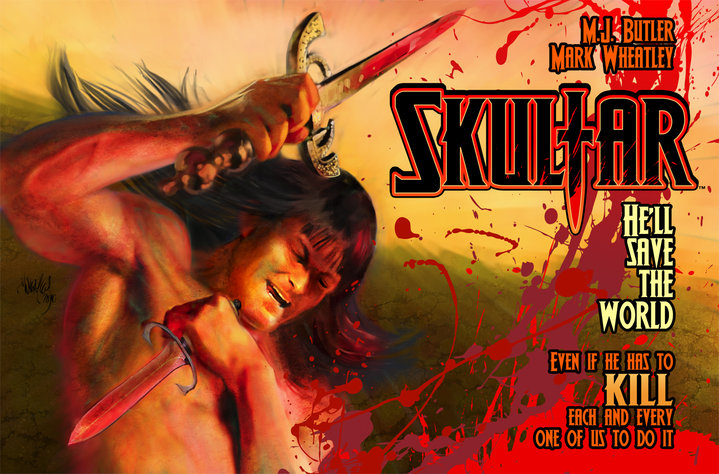 There’s something about barbarian swordsmen that lends itself to parody that can often outstrip the original– think Cerebus, Groo, and Maureen Birnbaum, Barbarian Swordsperson. And now we have Skultar, a new comic from M. J. Butler (Munden’s Bar)  and Eisner Award–winning artist Mark Wheatley (EZ Street, Lone Justice, Mars) appearing in Dark Horse Presents #7, on sale this December.

In an age before recorded history, in a brutal world ruled by myth, magic, and monsters, a hero rises to fight for the oppressed.

Unfortunately, he dies shortly after our story begins . . .

In his place, another rises up to be mistaken for Skultar, to claim the riches and reputation his legend brings. Similar to Skultar in strength, and nothing else, he nevertheless must stumble his way through his adventures, aided by Skultar’s right-hand man. If Skultar’s enemies ever find out he’s an impostor, nothing would stop them from imposing their dark rule over all the lands.

Born into slavery, trained as a warrior, it is his destiny to rule a kingdom by his own hand.

Mark Wheatley takes his parody seriously. “I think the best humor grows out of a true love for the source material—and I’ve been a fan of Robert E. Howard, Fritz Leiber, C. L. Moore, and sword-and-sorcery stories for half an epoch! That doesn’t mean I can’t see where it gets silly! And trust me, Skultar is where it gets silly!”