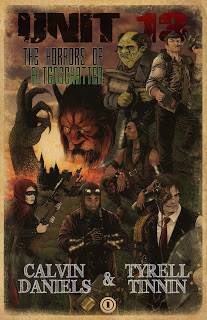 With the New Pulp movement in full swing these days it’s high time pulp fans took a look at what our fellow pulpsters north of the border are up to. Case in point: Unit 13 The Horrors of Altenschatten by Calvin Daniels and Tyrell Tinnin.
I really enjoyed this book and am anxious to see where further adventures will take this colorful cast of characters.
The novel gives us the inaugural adventure of Unit 13, a secret, elite military force fighting in France during World War One. Lead by Sergeant T.S. Crake, Unit 13 is not your average squad. In fact the war to end all wars depicted here is not your great, great grandfather’s fight. No, this conflict is more in keeping with Kurt Busiek’s Arrowsmith. Magic abounds and mythical creatures are fighting on both sides. Here’s where Unit 13 comes in.
Comprised of an enormously powerful Tollgre named Grymm, The Starling – a sultry female sniper/assassin, a wily First Nation Indian named Smoke, Solstice – an African-American with gloves which harness the power of the sun and Centurion a steampunk cyborg, Unit 13 takes on all comers and this is not a group you want to mess with.
Yeah, there’s something for everyone in this unit.
But the fun doesn’t stop there. Early in the tale they encounter Chimera who is the product of German medical experiments to create an army of super soldiers. Like his namesake, Chimera is half-lion, half-lizard and one dangerous customer. Once converted to the side of right, Chimera fills them in on the horrible experiments being conducted at Altenshchatten Castle to which the capture Grymm has been taken.
It’s Unit 13 to the rescue! And the bodies, body parts, blood and guts begin to fly!
The novel is a great action ride that should satisfy any fan of pulp or adventure fiction. The writing can be a little uneven at times and the narrative jumps around, sometimes jarringly, but there’s still more than enough thrills to keep you turning pages.
As this is the first adventure of the group, a goodly portion of the text is given to filling in character back stories while laying the groundwork for future tales. Here the jumping around nature of the novel is a benefit as we don’t linger too long with any one character, or group of characters, at one time.
All in all, the book is a great read which I recommend. At only $13.99 you get 218 pages of WWI excitement mixed with magic, mayhem, superheroic action, a little romance and some betrayal to sweeten the pot.
Unit 13 The Horrors of Altenschatten is one of the best examples of what the New Pulp movement is all about. Check it out.
Share