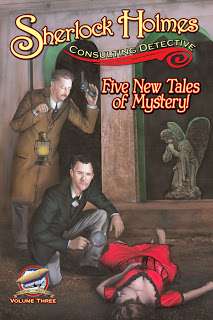 Airship 27 Productions & Golden Hammer Press are delighted to announce the next chapter in their best selling series with Volume III of “Sherlock Holmes – Consulting Detective” and present a brand new quintet of terrific, classic Holmes mysteries written in the tradition of his creator; Sir Arthur Conan Doyle.
Five brand new puzzles to challenge the Great Detective and his ever loyal companion, Dr.Watson.  Within these pages they will encounter mythological fairies seeming to plague a beautiful country estate, man-eating tigers on the loose in the streets of London and a stolen museum mummy.  These are only some of the mysteries awaiting the famous crime solving duo as penned by today’s most gifted writers; Aaron Smith, I.A. Watson, Joshua Reynolds and Andrew Salmon.  Both Salmon & Watson having won the prestigious Pulp Factory Award for their earlier Holmes tales in volumes one and two respectively.
Airship 27 Productions is thrilled to be continuing this extremely popular series which Sherlock Holmes fans around the globe have made an overwhelming success. “Of all the books we’ve done in the past six years, this series generates the most reader mail,” Airship 27 Managing Editor Ron Fortier reports.  “For months we’ve been bombarded by our Holmes fans wanting to know when this book was coming out.  I’m truly happy to say the wait is over.” Volume III features a wonderful new cover painting by Brian McCulloch plus eleven interior illustrations by the book’s designer, Rob Davis, another Pulp Factory Award winner for his work on volume one.  So load your revolvers, hail a hansom and prepare yourself for page turning thrills aplenty.  Once again, the game is afoot!
Airship 27 Productions; Pulp Fiction for a New Generation!
ISBN:  1-613420-09-9
ISBN 13:  978- 1-613420-09-6
Produced by Airship 27
Published by Golden Hammer Press
Release date: 05/27/2011
Retail Price: $21.95
On-Line Store (http://www.gopulp.info/)
Digital Store
http://homepage.mac.com/robmdavis/Airship27Hangar/index.html#holmes3
Share