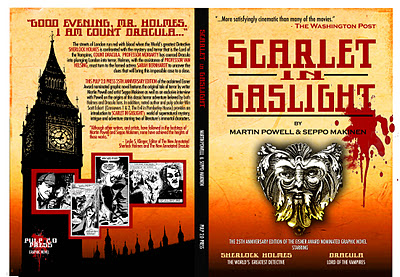 Pulp 2.0 Press is pleased to announce the upcoming December release of the 25th anniversary edition of SCARLET IN GASLIGHT, the classic graphic novel starring two of literature’s immortal characters, SHERLOCK HOLMES and DRACULA. Written by Martin Powell and illustrated by Seppo Makinen this thrilling supernatural mystery-adventure has been reviewed by no less than the Washington Post who said that SCARLET IN GASLIGHT is “…more satisfyingly cinematic than many of the movies.”

– remastered artwork from the artist

– a comprehensive interview with Martin Powell on the origins of SCARLET IN GASLIGHT conducted by Michael Leal.

For more on the 25th Anniversary Edition of Scarlet In Gaslight, visit the Pulp 2.0 Press website at http://pulp2ohpress.com/scarlet-in-gaslight-the-25th-anniversary-edition-due-in-december-2011/