Announcing The Rob Granito ‘Put Up Or Shut Up’ Fund 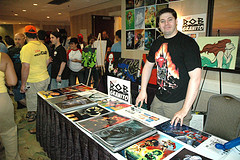 Last week, an email was sent around to various comic news sites saying that we could interview Rob Granito, the self-styled “bad boy of comics” for the princely sum of $250/hour so that we could get his side of the story. Rob, as you’ve probably heard by now, was going around to various conventions and selling artwork that he plagiarized from everybody from Andy Kubert to Bill Watterson, and claimed working with numerous people in the industry, many of whom are deceased, including the recently departed Dwayne McDuffie.

Now normally, someone who’s been accused of plagiarism and theft would be happy to talk to news outlets for free in the hopes of getting his side of the story out there so that he would stop being reviled and might actually get back into a comic convention or two, but not Mr. Granito.

We will pay your $250/hour rate for a video interview on Skype. At the beginning of that hour, we will provide you with the name of a comic character and a celebrity, and we will ask you to draw the character with that person’s head performing a simple action on camera. It could be Superman with Barack Obama’s head throwing a ball, or Wonder Woman with Jane Lynch’s head skipping rope, or Patrick Dempsey as Dr. Strange.

Any professional comic artist can create a sketch like this in a half hour, but we’ll give you the full hour. Of course, you can take longer than an hour, though we will only pay you for the first hour and we will ask you to keep the camera rolling, as we will be placing the video online so anyone can see your artistic process. We’ll also ask for a picture of the final art if your webcam resolution isn’t good enough to show the quality of your work.

And obviously, if we find evidence that you swiped the work, you won’t see a dime.

As to the rest of the comics community, we’d like to ask you to contribute to the fund to show your support. All funds raised above and beyond the cost of the “interview” (or all of it should Rob decline our offer) will be donated to the Hero Initiative, a not-for-profit organization dedicated to helping comic book veterans by providing a financial safety net for comic creators who may need emergency medical aid, financial support for essentials of life, and an avenue back into paying work. We’ll include your name as contributors to the fund both here on ComicMix and at the end of the video. While waiting for Kickstarter to kick in, here’s the PayPal donation button:

We’ll be updating contributions from time to time. We hope that you’ll contribute. Heck, we also hope that Rob contributes his fee and his drawing to Hero Initiative, though we aren’t expecting him to do so.

So, Rob, the ball’s in your court. Feel free to reply in comments.