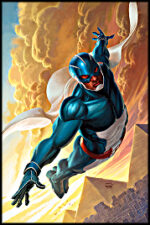 Last year Marvel made big news with the Black Avengers book they are doing or have done or will be doing.

Truth is I don’t know if it’s been done or not because these days I rarely read comics that get massive press. Unless I know the creator I’d rather pass on hype – especially if that hype has to with new black characters.

I’m sick to death of some making a big deal out of the black character they are bringing to comics.

Two reasons. The first is because two seconds (if that long) after the story appears in the press or the book goes on sale I’m asked to comment.

“DC is doing a book where two black people are in a street scene. What are your thoughts?”

“Well I think that anytime a major publisher puts two black people in a scene it’s another step towards Dr. King’s dream.”

That’s what I’d say. Sure I would.

If ever some asswipe asked me such an asinine question I’d be doing hard time for putting my foot up their ass. Not the 300 bullshit hours of community service I’m doing now. I don’t think anyone’s stupid enough to be that stupid but trust me some have come close.

Because of my so-called status as an African American creator I’m subject to many a question about Negro progress in the industry, so the easiest way for me to avoid going to jail is to tell the truth which is “I have not seen it so I can’t comment but I hope it’s good and if so it succeeds.”

Or, maybe my status has nothing to do with it maybe they know I’m good for a rant or two because I’m either fearless, careless or always high thus I will tell the bare truth no matter what. I’m not fearless, I’ve been careless won’t comment on being high but stupid I am not

I waited to comment on the recent new 52 Static book from the DC well after they killed the book, which, by the way, should have been killed. I’ve heard all the “DC should have given it a chance” bullshit on the net, but let’s get real. The book had issues and was not getting the support from the fans so what is DC to do? Continue to take a loss?

Wake the fuck up world. This is reality this is not some chat room where some pussy deprived little fan boy thinks he knows better than Diane Nelson, Jim Lee or Dan Dildio.

Truth is I don’t comment on any black book unless I love it. I refuse to say anything negative about black comic book content, not because it’s all-great because let’s face it a lot of is horrible. I won’t comment because I’m not that guy. Never in my life have I publicly stated any bad, adverse or harmful remarks against any black comic, creator or publisher…

Unless said creator or publisher invites a response by putting out straight up imaginary bullshit about Milestone. Then it’s on.

I won’t even comment publicly when a black creator says there are simply no black women characters created by black creators that have reached a mainstream audience.

Milestone’s teenage girl superhero Rocket reached and was an overwhelming success in the mainstream market – before she got pregnant. Then she was mainstream news. You can’t get more mainstream than the Washington Post and CNN, to name but two.

I did send the guy who was saying that in interviews an email saying “really?”

Everything I’ve read except for the official Dark Horse press release.

The Black Age Of Comics Convention (yep, I stole the name of this article from them) promotes black creators, publishers, comics and black pop culture in general. The goal of the convention is to reach black people and black kids in particular because there are so few black heroes for young kids of color to relate too.

That’s a wonderful thing and they do great work.

99.9% of everything I’ve ever done in comics, television, radio and mainstream publishing the main characters are black because that’s what I do. I’ve always tried to reach a mainstream audience and I’m well aware that black anything is a difficult sell in the first place.

So the second reason (this is so long you forgot I said two reasons eh?) is that I am sick of media news that spotlights the African American aspect of some projects because never, and I mean never, do any of these news stories even attempt to acknowledge what has gone before and most publishers co-sign that bullshit.

So that young black mother or father who sees that TV news report on Marvel’s Black Avengers will think this is the first time ever for a black character in comics and run out to get it for their kid.

To put it another way, it’s like saying Elvis never listened to or was influenced by black music. Eminem is a great rapper and I’m sure if FOX News had a music channel they would have you believe he started Rap and discovered Dre.

Milestone is the most successful African American line of comics in history. We were not the first to publish black superheroes. Not even close. And we said as much and still say as much in public.

You can bet when black kids attend the Black Age Of Comics Convention they are told repeatedly about the vast history of black characters in comics and all media.

My dear friend (to me more like family) Lana Walker is one of the very few people I won’t question if she wants me to meet someone. If she called and said “Michael, I want you to meet with this axe murderer who will try to kill you” I’d take that meeting. No question.

I’m pretty damn sure Lana did not tell those people, “You should meet Michael Davis, he’s black. When I showed up it was pretty damn obvious I’m black. When a new black character shows up and the media covers it, the publisher promotes it as if it’s the first black character ever it is not only, in my opinion, fucked up lazy journalism. it feels to those who know it’s bullshit like yet another total disregard of African American history.

I’d just like publishers to at least give a nod to what has come before when promoting black content.

Or do like Dark Horse and make it about the character.

If you feel the as a journalist the black angle is a good one, do some fucking research and at least write something about what has come before even if it’s something like this:

Black Dick, the story of an African American private eye is a new comic from Poon Tang Publishing. It’s the very first black comic ever… I think.

If people like the character and the idea behind it color will matter not. Blade and Spawn are perfect examples. Yeah, Spawn is black. If you can’t tell because of his mask ask yourself what’s up with that third leg.

BTW, “Black Dick” is trademark & copyright Michael Davis 2014 All Rights Reserved and is not the first black character.