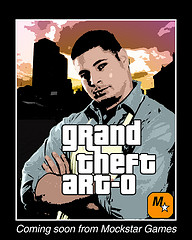 Well, this is one way to steal focus from this weekend’s MoCCA festival.

Kelly Rowles reports this message from Rob’s wife Alison, who apparently represents “Rob Granito Art Services” and has tried to get people to pay for interviews with Rob. After telling them they won’t pay for any interviews, she got this reply:

I am sorry to hear that. I will give you a scoop though. That is is illegal to ban Rob Granito as a vendor at all conventions. And currently Rob Granito is working on material for a one-man show/panel in which he admits and apologizes for his past mistakes, while at the same time shedding new light on the politics within the comic book community, and lets you know the REAL story. Rob will also be telling jokes and doing humorous sketches on stage, so it will show a whole new side. We are looking towards premiering this at the New York Comic Con in October. The name of the show will possibly be “Controversey Creates Ca$h”. We believe there is a band wagon making it trendy to hate Rob Granito without knowing him, and the claims that he has stolen all his work has been blown out of proportion, thanks to people like Mark Waid, Ethan Van, Bleeding-Cool, and Jammar (sic) Igle. Again, giving us a chance to tell you the WHOLE story would benefit both your website and the comics convention community. Please reconsider. We are open to working out a payment plan if that works better for you.

Call it a hunch, but I bet the nice folks at NYCC are not going to have Rob on any panels, nor rent him a table, nor even let him in the door. Although they could raise a lot of money if they rented a dunk tank for him.

I’ll have to ask “Jammar” this weekend at MoCCA. See y’all there.