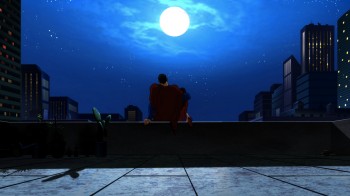 In All-Star Superman, the Man of Steel rescues an ill-fated mission to the Sun (sabotaged by Lex Luthor) and, in the process, is oversaturated by radiation – which accelerates his cell degeneration. Sensing even he will be unable to cheat death, Superman ventures into new realms – finally revealing his secret to Lois, confronting Lex Luthor’s perspective of humanity, and attempting to ensure Earth’s safety before his own impending end with one final, selfless act.

All-Star Superman is now available from Warner Home Video as a Blu-Ray™ Combo Pack and 2-Disc Special Edition DVD, as well as single disc DVD. The film will is also available On Demand and for Download.

Morrison had a few moments to chat from his home in Scotland last week about the all-new film based on his landmark comics series, and the late Dwayne McDuffie’s impressive job in re-imagining Morrison’s words into animated glory.

Question: Did you have, and did you want, creative input into the script?

Grant Morrison: Once I knew someone else was going to do it, I kind of wanted to let it happen and not interfere. I’m always excited to see how others translate things from page to screen. I didn’t even know Dwayne (McDuffie) was involved at first, but I’m so glad he did it. I was happy to see what the story might look like from someone else’s perspective and he did a fantastic job. 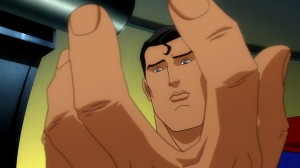 Question: Overall, how did you feel your story translated from page to screen?

Grant Morrison: I really loved it, which was why I wound up raving about it on so many of the DVD extras! Dwayne worked in a staggering amount of story, and he was able to give it this wonderful, strange episodic flavor where it seemed as if every day could bring some incredible and unexpected new challenge into Superman’s life.  I didn’t really expect half of the material from the book to be in there, and loved the way it was organized and edited because it made the whole thing a very different experience for me.

Question: Were you disappointed that anything was cut out?

Grant Morrison: You’re always a little disappointed when some favorite detail doesn’t make the cut,  but what did make it was so well-done and faithful to the source that I can’t really say I was upset. It’s a long book that could easily make a six-hour movie, so I’m amazed All-Star incorporated as much of the story as it did, more than anything else.

Question: Were you particularly pleased with the way certain things were condensed?

Grant Morrison: It was impressive that Dwayne was able to condense entire issues of 22 to 24 pages into tight, satisfying eight- or ten-minute complete scenes. To take a whole issue and make it into an episode that felt complete in itself inside a larger narrative was ingenious and was a great way to translate the book’s serial structure into a feature film. I hope Dwayne knew how much I appreciated his work on this.

Question: Are you a fan of animation? 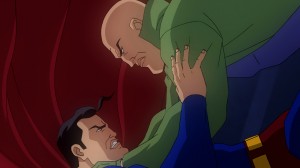 Grant Morrison: I couldn’t say I’m a giant animation fan, but I love the obvious stuff from around the world. I always liked the Fleischer animation, the Superman cartoons and the old features they did. I’m not a major animation fan but I do think the good stuff in any field stands the test of time.

Question: Which of your stories do you think would best translate to animation next?

Grant Morrison: I don’t really think of the stories being done as films. When I’m writing them, I’m focused on what makes a good comic rather than a potential movie. Having said that, seeing All-Star Superman left me quite keen to see some more! I think it would be fun to see what they could do with Final Crisis or one of the Batman stories, like Batman R.I.P. in that dark Bruce Timm style. I’d love to see something done with Doom Patrol or Seven Soldiers. Go for it.