Joanne Siegel, the widow of Superman co-creator Jerry Siegel and model for the original likeness of Lois Lane and the person who inspired Lois’s middle name, has passed away at 93. Word hit the comics community yesterday through a Tweet from Brad Meltzer and was later confirmed by the Cleveland Plain Dealer.

“I got the word from the people at the Siegel and Shuster Society. I met her when I was doing [my novel] ‘The Book of Lies’ because I was researching who killed Jerry Siegel’s father. I met Laura first, who is Jerry and Joanne’s daughter. We became really good friends, and she said to me ‘Of all the people who have ever researched Jerry Siegel, you’re the only one who’s ever called us.’ I became really close with the family, and they seemed really excited that someone was going to tell their story.”

“The crazy part is– of everyone I’ve ever spoken to in my life, there’s nothing like speaking to Lois Lane. When I finally met her at the unveiling of the repaired Siegel and Shuster house, which I flew to because I wanted to meet her face-to-face and see all the work everyone in Cleveland had done, everyone said to me ‘She’s beautiful. You won’t believe how beautiful she is.’ And I was thinking that this is a 90-year-old woman…how beautiful can she be? But she was beautiful. It was the only way to describe her. You saw here, and there was this stunning, elegant, amazing woman that was a spitfire.”It wasn’t like talking to your grandmother. You really saw ‘intrepid reporter’ as part of her personality. I just got a note from her in December talking about everything we’ve been doing on the [History] show and it’s still amazing to see how much she had going even at that age.”

The former Joanne Carter met her future husband and his artist partner Joe Shuster in Cleveland in the late ’30s when she responded to an ad the two had placed looking for local models. The original sketch Shuster did of her grew to become the foundation for fast-talking reporter Lois Lane, and Joanne later married Jerry in 1948. In the years since, she stood by the struggling writer as he saw the financial benefit and artistic credit for Superman pass him by while his publisher pushed the character to wider cultural acceptance, and later took a very public and prolific role in fighting DC owner Warner Bros. for the rights to the character after her husband’s passing in 1996. Along with her family and the family of Shuster, Siegel teamed with well-known intellectual property lawyer Marc Toberoff to push for more rights on the character than Superman’s creators had ever been able to earn in their lifetimes, which led to various reversions and much wrangling over settlements and compensation. The suit has been on hold since October, and it is unknown how Siegel’s death will affect the proceedings.

Here’s a photo from Alan Light of the Siegels (Jerry, Joanne, and daughter Laura) from the 1976 San Diego Comic Con. 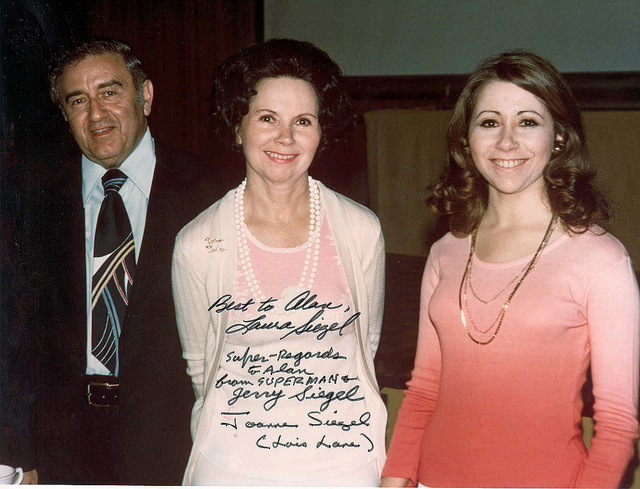