We oftentimes get the attitude that just because a story has a theme or is centered around an event, especially a holiday, that it is just that…a special novelty tale in remembrance of so-and-so and/or when-and-when.  We feel these sort of stories don’t usually have anything to offer to the general literary field or to the character they deal with, that they’re simply a trumpeting of a special time and that’s it, that they sort of stand alone.   I hate that because we miss the fact often that these stories have great things to contribute, that because they do deal with a holiday or special event, there are aspects of said day and event that can be mined, made literary, and transformed from an obscure detail or more hokum into sparkling tools of storytelling and even horrifying figures we are not likely to soon forget.

Joshua Reynolds, fortunately, did not miss that fact.  Not at all.

KRAMPUSNACHT is a tale that Josh wrote last year to introduce a new series character he’s doing for Pro Se Productions’ FANTASY AND FEAR magazine.  Charles St. Cyprian is the Queen’s handler of occult oddities and mystical mysteries and comes with a skillset all his own in dealing with such things.  This tale, however, finds St. Cyprian and his very well crafted assistant Ebe Gallowglass (maybe it’s the whole British motif, but I got a very Emma Peel feel for Gallowglass) at Cyprian’s residence when he receives a visit from an old acquaintance.  This acquaintance has run afoul of one of the lesser known and much less liked aspects of Christmas mythology, the antithesis to Santa Claus, the creature known as The Krampus.   The tale involves St. Cyprian’s attempts to deal with the Krampus, determine if his friend’s place on said naughty list is valid, and to wrap it all up with a nice Christmas bow, which he does.  And so, as an author, does Reynolds.

Reynolds paints not only a horrifying yuletide haunt with this tale, but he also sets up St. Cyprian and Gallowglass very well.  Their dialogue, their interactions, and their overall personalities are so well established that the reader wants more, but also feels like they already know them.  And as for St. Cyprian’s ‘client’, Joshua builds this character from the first word to the last in such a way that he himself is a mystery and the way it unfolds is completely and totally satisfying. 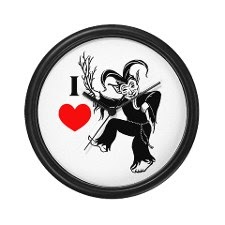 For those of you who missed KRAMPUSHNACHT, I’m sorry.  You can catch St. Cyprian every third month in FANTASY AND FEAR.  For those who got the pleasure of this great Christmas introduction to the characters, it was a good holiday, wasn’t it?

FIVE OUT OF FIVE TIPS OF HANCOCK’S HAT