ALL PULP NEWSSTAND
BULLDOG EDITION
2/15/11
PULP HERO ENCYCLOPEDIA WELL UNDERWAY, BUT STILL WANTS MORE!
Tommy Hancock and Barry Reese, editors and writers of TURNING THE PAGE, a volume dedicated to modern Pulp heroes created since 1955, report that they are well into completing essays and formatting this extensive volume.  Although originally planned to be a self published tome, TURNING THE PAGE will now be the first of hopefully many similarly themed volumes from Reese and Hancock published by Pro Se Productions﻿.
TURNING THE PAGE is a collection of essays and, when available, art that spotlights and gives brief histories and commentary on characters that have arisen since 1955 in the Pulp genre.  Reese and Hancock, working on an inspiration from Pulp legend Tom Johnson, announced this planned book late last year and both report that progress is being made, but they also want more characters to fill the pages!
“This,” Hancock states, “is to be the definitive reference guide for the Pulp Renaissance, at least that is our goal.  To do that, we need all the characters we can get that would qualify as pulp heroes. We have an awesome cast already, don’t get me wrong, some of them dating back to 1955 and some created within just the last few weeks.  But we want more.  Lots more.  If you have a character that you’ve created that fits a pulp genre (action, adventure, crime, western, fantasy, etc), then we want it in TURNING THE PAGE!”
If you are interested in your published creations (either in print or in e form in an e-publication and/or a well done, organized site) being reviewed for inclusion in TURNING THE PAGE, email the TURNING THE PAGE staff at thpulp@ymail.com.  If you have submitted your character already and have any new information or stories to add, Hancock encourages you to email that also.   Originally announced as being slated for March, Hancock reports that with the desire to include more characters as well as the move from self publishing to Pro Se, the more likely publication date will be April, 2011.  Stay tuned to ALL PULP for any and all updates!
BOOK CAVE CATCH UP! 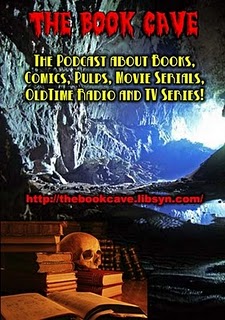 Due to being ill and such, ALL PULP has not kept its stalwart readers caught up with the latest BOOK CAVE episodes.  Apologies to all who have waited with baited breath, but most of all to Ric and Art!  Find the last two weeks of BOOK CAVE episodes discussed below…
February 2011
2/9/11  The Book Cave Episode 113: The Pulp Factory Awards
Ron Fortier and Rob Davis joins Art and Ric to talk about the second annual Pulp Factory Awards coming to Windy City. My recording program stopped close to the end and muted my mic. You aren’t missing much, just Ric yelling like a crazy nut trying to tell the others that he was no longer recording. I think it was a couple of minutes before they realized I was gone.  ;-)  no All Pulp news this week, Tommy Hancock couldn’t get the nurses to let him out of his room in the nursing home. Be sure and check out the All Pulp site to see what is going on for this week.
2/2/11 The Book Cave Episode 112: The Return of Bill Preston
Bill Preston returns to talk about “Clockworks”, his prequel to last year’s epic short story, “Helping Them Take The Old Man Down”.
Share