ALL PULP NEWSSTAND
BULLDOG EDITION
2/4/11
PRO SE AND HANCOCK TAKE US BACK TO
YESTERYEAR WITH DEBUT NOVEL
Pro Se Productions, producers of Pulp Magazines beginning in August, 2010 and Pulp author Tommy Hancock, a nominee for Best New Writer in the First Annual Pulp Ark Awards (voting underway now), announce today that Hancock’s first full length novel which will also be Pro Se’s first novel to publish is in the final stages of editing and will debut within the next 4-6 weeks﻿. 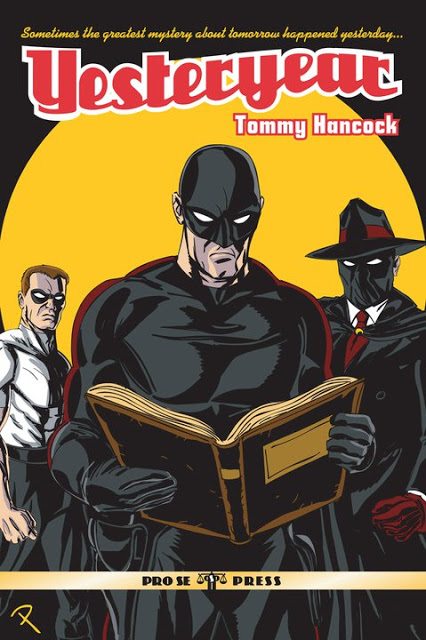 YESTERYEAR is Hancock’s first full length novel work, but has been a work in progress for nearly ten years.  Now thanks to Pro Se Productions, this long told, but little read tale will finally be shared with the public.   And it sports a fantastic cover drawn by Jay Piscopo!  “The three characters,” Hancock stated to ALL PULP, “featured on the cover are sort of the crux of this whole universe while the book one of them is holding is the lynchpin that could send that world spinning into oblivion.  Jay’s work brings out the contradiction of glory and darkness that these heroes go through as well very clearly illustrates character traits of each of them without a word on the cover about them!  The attention to detail and the focus being on that book…that all important book…makes this cover jump out at me and this would not be the same book without Jay’s cover.”
According to Hancock, the basic concept is that the YESTERYEAR world was a fairly normal place until October 29, 1929.  Not only did the world very nearly collapse under economic depression, but something seemingly more positive happened.  A man flew.  Without an airplane.  Under his own power.  And he wore a mask.
This singular incident sets off the appearance of a string of Heroes, taking their name from the name given to the first of their kind by the papers-Hero- who are more or less pulpy in nature, although some tip their hat to the super hero genre born from the pulps.   These heroes enjoy a particular ‘golden age’ well into the 1950s.  But in 1955, a well known author, who also happened to have been a Hero, vanishes and along with him a much rumored manuscript that, through the use of newspaper articles, letters, and stories revealed the true obsidian side of this golden age.  Both author and book have been missing.  Until now.
“There are really three stories,” Hancock said, “being told in YESTERYEAR.  One is the modern tale, of how this book with all these alleged secrets pops back up and sets the entire world, most definitely the inheritors and keepers of the Heroes legacies, on edge.  Another one is the titular manuscript itself.  Pieces of it will be printed in the book and will tell stories of how the Heroes were seen in their day, the two fisted, heart of gold stories.  Then other parts of the manuscript will be used as well and these are the ones that aren’t so shiny but oh so revealing.  I hope with this concept I’ve pulled off something that’s not really been done extensively.  Construct an universe, deconstruct it, yet allow enough of what was good about it, even if it was a ball of lies, to remain for the reconstructing that must follow.”
Hancock stated that the plan currently is to have interior art in the book as well from an up and coming artist in the Pulp field, but that this book will be available by the end of March and will not be held up by any delays.   The book is being published by Pro Se Productions (http://www.proseproductions.com/, pulpmachine.blogspot.com).  Hancock also pointed out that the book, including the graphics work on the awesome cover, will be designed and formatted by Sean Ali, Pro Se Design Specialist and a long time friend and supporter of Hancock’s works.  Also, the book will open with an introduction by noted Pulp author Derrick Ferguson, the first writer other than Hancock to write characters from the YESTERYEAR universe almost ten years ago.
Stay tuned to ALL PULP for future information on the release of YESTERYEAR!
﻿
Share