HANCOCK TIPS HIS HAT TO THE DAMNED THING! 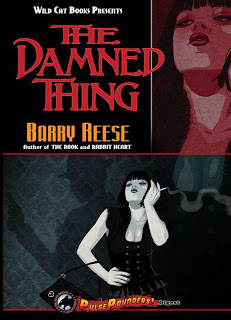 For those of you who have read my reviews since starting ALL PULP, you know that I tend to like to say a little something in the opening and even though I’m usually very positive, I’m not full of accolades and purple prose…until now. Get ready…

This is the best work by Barry Reese I have ever read.  Simply.  Period.

Reese has shown through his various works, including 5 volumes of THE ROOK, a book about Ki-Gor, the LAZARUS GRAY stories for Pro Se Productions, RABBIT HEART, his novel from 2010, and other stories and tales, that he can handle multiple genres and knows how to build characters and tell a story.   After reading THE DAMNED THING, I now know that those other books and tales were just wonderful steps to the masterpiece this book is.

The story of THE DAMNED THING centers around Violet Cambridge, a Private Detective in the late 1930s who runs an office with her dead husband’s former partner.  The story starts like many detective tales, a comely young woman walks in and wants her sister found.  Of course there’s twists right from the beginning, the case becomes focused on a relic, and Violet ends up having to avenge her partner’s death.  If you think I’ve spoiled anything, I’ve only given away information in the first twenty or so pages.

Reese seamlessly blends good old fashioned mystery, private eyes, supernatural hoodoo, mafiosos, asylums, and even Alistair Crowley.   The action does not let up, every aspect of this story, from violence to sex to exposition, is used just enough and is dead on at every turn.   It’s a short read which is good in that you can’t put it down anyway but is bad in that you want more, even though the story is tied up pretty well.  Throw in a fan favorite character from Reese’s THE ROOK and you have a pulp burner here that cannot miss.

And I didn’t even go into the fact that this is possibly one of the best tributes to THE MALTESE FALCON I have ever seen that didn’t drift into parody, but maintained its own identity while still nodding respectfully to that classic.

FIVE OUT FIVE TIPS OF THE HAT-The best Reese and one of the best Pulps I’ve read in a while.