ALL PULP NEWSSTAND
BULLDOG EDITION
2/2/11
PULP FACTORY AWARDS BALLOT SET, VOTING BEGINS!
The Pulp Factory, an online mailing list founded and administered by Ron Fortier, noted comic and pulp author, announces its second year of voting for the PULP FACTORY AWARDS.  These awards cover four categories and nominations are made by members of the Pulp Factory and those receiving the most votes make up the ballot.  Factory members also vote on the ballot and voting will be open through March 31, 2011.
According to Fortier-

This year’s nominees represented twenty-eight writers, twenty-eight artists and a fifteen publishers. Ladies and gentlemen, the Pulp Renaissance is here. Good luck to all our nominees. 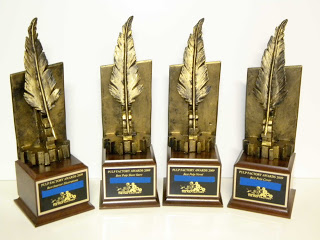 It is with great pleasure that we introduce you to David L. Golemon, NY Times Bestselling author of EVENT, LEGEND, ANCIENTS, LEVIATHAN, and PRIMEVAL. David comes to us with a fantastic new tale of terror…The SUPERNATURALS…a classic ghost story that will chill you to the bone. I can honestly tell you…this is one book that will give you sleepless nights.

The SUPERNATURALS will be released in October 2011!

Here’s a quick synopsis of the book:

Summer Place—built at the turn of the twentieth century by one of the richest and most powerful men in the world. Tucked away in the pristine Pocono Mountains and used as a summer retreat for the rich and famous, Summer Place was the description of charm and beauty. Built to spec, the twenty-four bedrooms and manicured grounds sparkled. It was truly a home that was as warm and beautiful as any well-appointed resort.

For a retreat that boasted the most glamorous setting in all of America, the gable roofed mansion was the epitome of tranquility…until 1925 when something went horribly wrong. Once homey and inviting, Summer Place had now become a haven for evil incarnate. A dark presence came to the yellow and white trimmed mansion, and it was now collecting the souls it needed to survive and thrive amongst the mountains that surround it.

Closed down by the owners and not lived in since the start of World War II, Summer Place has been maintained in its pristine condition, waiting for the team of men and women to discover its dark secret. In a national television broadcast reminiscent of Orson Wells War of the Worlds broadcast of 1939, America will witness on live television the coming of true evil, and it will be up to Professor Gabriel Kennedy, a disgraced Psychologist who had once faced the evil inside of Summer Place and came away a true believer in its extraordinary power. Now, along with the paranormal ghost hunting team; The Supernaturals, Kennedy will draw out and try to end the haunting that has been going on at Summer Place for over a hundred years.

You are asked to bear witness to the battle of wills as the thing inside of Summer Place will not go down without a fight!

Here’s a brief BIO about David…

David L. Golemon was born and raised in Chino, California. He has raised three great children, Shaune, Brandon and Katie Anne, and has welcomed a new daughter-in-law to the family, Tram, and last year a brand new baby granddaughter named Kiera.

David spent many years in Loveland, Colorado. He now makes his home on Long Island, New York. He was taught at an early age to love books by his father who passed on his love of reading to his son after driving a tank across Europe in World War II. His influences include, Edgar Rice Burroughs, Tom Clancy, Clive Cussler, Larry Bond and the greatest character writer in history, Stephen King. He hopes you will find touches each of these authors in his work.

David is the New York Times bestselling author of Event, Legend, Ancients, Leviathan, and Primeval, and in 2011, Legacy, all available through Thomas Dunne Books, a division of St. Martin’s Press, whom David has been a part of since 2006 and where he will continue his tales of the Event Group. David is now thrilled to be a contributor to Seven Realms Publishing where he has another outlet for his wild imagination!

Please join me in welcoming David to our ranks! We couldn’t be more pleased and know that his woeful tale of horror will have you clambering for more. We’ll keep you posted!