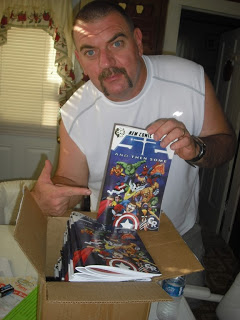 Bill Gladman, a writer/artist has been involved with comics most of his life. He recently helped form a local comics studio, Twilight Star Productions and last year they released twelve titles in their first year. Bill also ventured into the world of pulps for the first time ever when he contributed a story to RAVENWOOD – Stepson of Mystery from Airship 27 Productions. We caught up with this fellow in his home town of Springfield, Ohio and sat down to talk about his new pulp writing career.

AP – Bill, thanks for joining us today. Give us a short bio of yourself, age, where you were born, schooling, family etc.

BG –Born in Marysville, Ohio. About a half hour drive north of Springfield. In true dynamic fashion. In a middle of a thunderstorm, two minutes before midnight July 25th 1967, making me 44 years old this summer.

As far as schooling goes it seems I’ve learned all the important stuff by accident. I did graduate from Springfield North High School in 1985. I also went to Springfield Joint Vocational School during my junior and senior years of high school where I studied commercial art and girls. Unfortunately I didn’t get a certificate in art because I missed way too many days my senior year. I was sure the garage band I was in at the time was going to be world famous in six months and rock stars were too cool to go to school, right?

Currently married to my second wife and love of my life 13 years this April….between us and our previous marriages we have four kids and five grand kids.

AP – How old were you when you first became a comic book fan. What was the attraction? 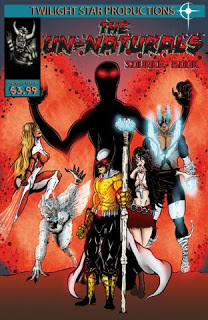 BG – I was seven years old. My grandmother bought me a copy of Avengers #145 at the gift shop at one of the local hospitals. We were visiting my grandfather who had suffered the first of many strokes that would eventually claim his life a few years later and she wanted to keep my mind off things at the time so she bought me that comic. It all started then and there, so my grandmother gets all the credit, or blame. Depends on how you look at it I guess.

AP – Marvel or DC? Who was your favorite comic book superhero and why?

BG –Captain America. He’s the guy for me…..guess he always has been. He played a large role in that first Avengers story and although over the years when asked this question I may have said something along the lines of Daredevil or Batman, maybe even Dr. Strange…truthfully I guess it would really have to be Cap. The amount of Captain America comics in my collection would seem to only cement that train of thought.

AP – How did you come to write a Ravenwood story? Had you ever heard of the character before? 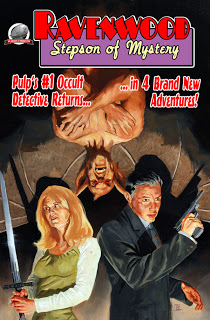 BG – I never heard of the character at all. I ran across a post on the Comic Related website made by Ron Fortier in which he was attempting to recruit fresh blood to write pulp stories for Airship 27. I’d never wrote a pulp story before, and never really read any either but I thought it would be a nice creative challenge so I e-mailed Ron to let him know I was interested. He sent me a list of characters that was available and that Airship 27 was interested in publishing stories about. Ravenwood was one of about three characters that seemed to appeal to me and the ball got rolling from there.

AP – What’s the name of your story in the Ravenwood collection? What appealed to you about this particular pulp hero?

BG –“When Death Calls”. After I received more background information about Ravenwood I felt there were elements of Dr. Strange, Bruce Wayne (both personas of that character), and Tony Stark (Iron Man) in the Ravenwood character. That allowed me to have a safety net of sorts. Plus there was just enough background info to get me interested in the character but I wasn’t smothered with details. There was a lot of room for me to breath as writer with this character.

AP – Was writing pulp easier or harder than your comics work? Elaborate, please.

BG –It was actually easier for me. It was exciting, new, and fresh. It was a great experience for me. I’m a big history buff as well so I enjoyed the research aspects of the story as well….what was the most popular film of 1938…how much did a pack of cigarettes cost 73 years ago. That type of thing. And I’m a very wordy writer. This story allowed me to express myself in a way that writing comics do not. I get grief from the artists I work with all the time about the amount of dialog in my stories. And in the end I still went over the word count for the story requirement. Go figure. Needles to say a good portion of it ended up on the editing floor. 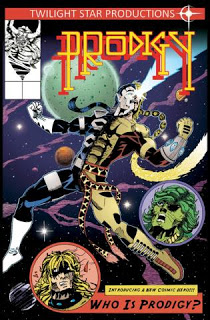 AP – There seems to be a real renaissance of pulps today in both prose, comics and movies. Why do you think that is?

BG –I think it’s a couple of things, and this is just the opinion of some hack in Ohio so bare with me.

I think that pulps in prose and comic formats and hopefully film caters to the mature reading audience that actually collect comics and go to the movies. They’re action packed, entertaining, suspenseful, and fun. Mature doesn’t have to mean sex and violence. Mature can mean, wow that story made me think and I liked that.

Also I think the escape level in the pulp stuff is higher than your super-hero comics or horror comics. The time period that these stories take part in for the most part was less complicated and negative. At the same time the fiction is a little more realistic. I mean nobody is finding a baby from another planet in a rocket ship in a Ravenwood story.

AP – Will you ever do another Ravenwood story? 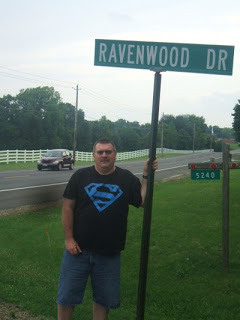 BG –Oh yeah. I loved working with this character and the cast of characters involved with this story. I already have ideas for a second and a third story.

AP – Is there any other pulp character you’d like to write some day?

BG –Possibly. I’m quite content writing Ravenwood for now but one of the other choices that appealed to me at first was Moon Man. He sounded like a fun character to write.

AP – Finally, what’s on the horizon for Bill Gladman and Twilight Star Productions?

BG –At times there’s so much stuff going on at Twilight Star Studios I can’t see the horizon! Seriously this studio has been very productive and although I have been involved in several different studios in the past there has not been an experience like this. One a personal note I’ll be involved with several of our books including Tales From The ‘Field which is our flag ship title and an anthology comic. I usually write short stories and even sometimes ink other short stories for this title. I write short stories for our horror anthology series Pandemonium Spotlight, write and draw Prodigy an on-going cosmic super hero tale, write and draw Jack the Rabbit an action/adventure/fantasy limited series. I also write and ink the Un-Naturals and recently co-wrote Hero Of The Day featuring the character Hero Montgomery created by a good friend of mine (Chad Strohl) as well as act as Executive Editor on all of our books. I also plan to re-release my first novel The Book Of Noheim through the studio. More novels will follow. 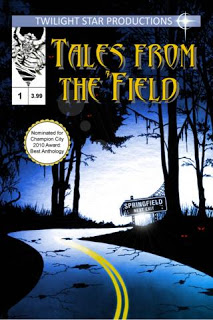 I also write two weekly web comics for the Comic Related web site (New Comic Day and Price For The Asking-with Ron Fortier) there is a third web comic about to launch on that site as well (The Bumtastic Four) I can also be found every other Monday co-hosting the RaynMan Power Podcast on that same site with Frank Raynor.

I have comic projects in the work with Penny Dreadful Press and Studio Akumakaze and a few other bigger companies which I’m not “allowed” to talk about at the moment.

AP – This has been fun and informative, Bill. Thanks and good luck with all your many projects.