TALES OF THE ROOK DEBUTS FROM REESE UNLIMITED AND PRO SE !

Reese Unlimited, an Imprint of Pro Se Productions, proudly announces the release of TALES OF THE ROOK!  The Rook, a character created by Barry Reese, now lives on in stories written by Reese as well as five other premiere writers of New Pulp!
“When The Good Is Swallowed By The Dark…There The Rook Shall Plant His Mark!” 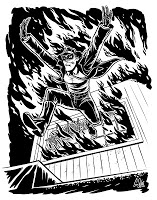 For years, New Pulp Author Barry Reese has masterfully written the thrilling adventures of The Rook, a masked Hero of Reese’s creation who is compelled through dark dreams to hunt down and destroy evil wherever it might hide! Assisted by loyal friends and a vast array of allies from the annals of Classic and New Pulp as well as Comics of a bygone era, The Rook’s escapades have been a hallmark in the world of New Pulp!
Now, for the first time and under the REESE UNLIMITED imprint, Barry Reese has invited some of New Pulp’s finest authors into The Rook’s world to put their unique spin on the character and tell their own tales…TALES OF THE ROOK! Featuring stories by Ron Fortier, Bobby Nash, Mike Bullock, Percival Constantine, Tommy Hancock, and a brand new ROOK tale by Reese himself! 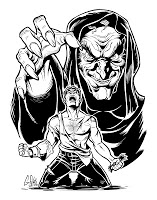 Concerning the popularity of The Rook and his cast of characters, Barry Reese commented that the concept was still with him, six years after its debut.  In the book’s introduction, Reese says, “Others have felt the siren’s call, as well. The Rook has appealed to them to the point where they agreed to write new stories featuring my hero. I’m flattered and thrilled to present the results to you. Some of the greatest writers in New Pulp have crafted their own takes on The Rook and it’s a lot of fun to see where they went when given the chance. “
TALES OF THE ROOK also features an explosive cover by Bob Hall, stunning interior art by George Sellas, and outstanding format and design by Sean Ali! Ready for the best in New Pulp? Get it today in TALES OF THE ROOK! From Reese Unlimited and Pro Se Productions!
Available now on Amazon – http://www.amazon.com/Tales-The-Rook-Barry-Reese/dp/1477532552/ref=sr_1_1?s=books&ie=UTF8&qid=1338044331&sr=1-1
And at www.prosepulp.com!
EBOOK COMING SOON!
Pro Se Productions- Puttin’ The Monthly Back Into Pulp! www.prosepulp.com
Share