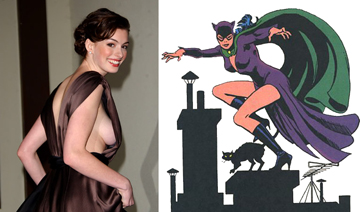 Finally, the cat’s out of the bag. Anne Hathaway beat out Jessica Biel and Keira Knightley for the role of the nefarious Catwoman in the third final Christopher Nolan / Christian Bale Batman movie, The Dark Knight Rises. She’ll be the sixth actress to field the part.

Hathaway’s recent movies include Alice in Wonderland, Get Smart, The Devil Wears Prada, and Brokeback Mountain. Yes, I’m the only person on Earth who liked Get Smart.

Tom Hardy will also join Bale, Hathaway, Michael Caine, Gary Oldman, and Morgan Freeman as the murderous Bane, a real stretch from his performance as Heathcliff in Wuthering Heights.

Word has yet to escape as to how the Catwoman character will be handled, or even if she will be Selina Kyle, of comic book fame. However, director Christopher Nolan usually gives his characters a dark, sinister edge. Indeed, one might ask “Why so serious, Chris?” but that might be in bad taste and I don’t do that.