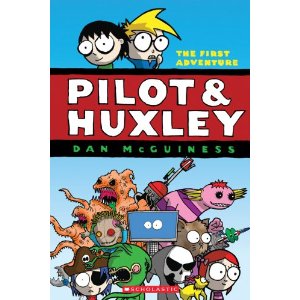 Australian cartoonist Dan McGuinness could draw from childhood but it wasn’t until he began working for a comic shop and a skateboard company that he began parodying is friends and life in a series of sketchbooks. Out of these doodles and daydreams evolved best friends Pilot and Huxley who are everykids, prone to take risks, obsessed with the gross, and dedicated to a life of videogame playing. When they’re late returning [[[Alien vs. Terminator vs. Predator vs. Robocop vs. Jim Carry]]] to the store, panicked aliens send the Grim Reaper to collect it since that copy contained the secret password to activate their secret weapon.

And so begins the fast-paced, uproariously silly antics of the two boys, whisked far from home and seeking a way back without letting the aliens conquer their homeworld. The new series is coming out in rapid fashion with book three scheduled for release in a matter of weeks. The colorful pages are filled with the outrageous and the gross as the boys need to obtain the golden nose hair from a Mountain Giant or duck blasts from a snot gun.  The boys sound like boys on the cusp of adolescence and McGuinness does a nice job with different character voices.

Not everyone is out to kill them as they met Brett, a girl who can also turn into a giant pink beast.  And then there’s Tuppence McFrilly, who the boys freed from a monster. The pirate boy had been trapped for 40 years without aging a day and also has the odd ability to transform himself in an armored tank – just what they need for protection.

Younger readers will love the slime and snot along with the absurdist approach the subject matter. The alien environments and threats are far from scary since the danger is tempered with doses of a wacky humor (the Grim Reaper pursues the boys but has to take the bus).

While the main threat is ended as the book ends, the boys’ attempt to return home hits a snag so they, and Brett, find themselves in yet another absurd environment, leading readers to the second volume.

This is fresh and fun and ideal for the younger readers. McGuinness is off to a strong start and based on the positive reviews this series is already receiving; it’s likely these boys will be having many more adventures in the years to come.