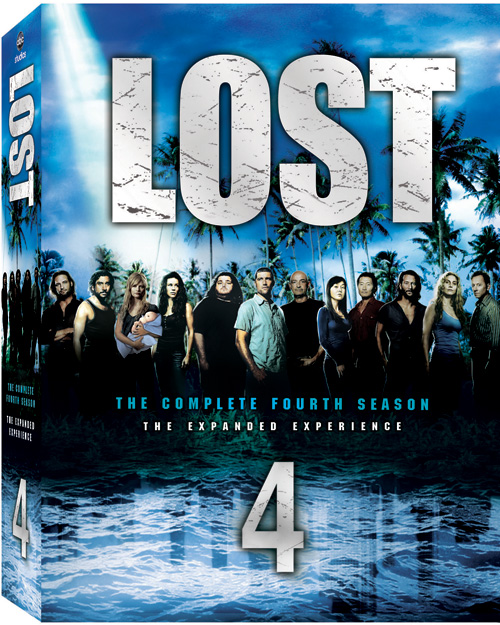 Serialized television has seen a decline in ratings after becoming all the rage, ignited largely by the originality and quality of Lost.  Created by J.J. Abrams, Carlton Cuse and Damon Lindelof, the series had an intriguing premise, an intricate mythology and a sprawling cast, but they never took the focus off the characters.  We got to know them, one by one, and came to care what happened. As several regulars died off, we were repeatedly told, this is a dangerous situation and everyone was vulnerable. This season, more favorite characters are wiped away in dramatic fashion and helps inform those who survive.

Of course, the fun of the series is also seeing the dead come back to appear in flashbacks and hallucinations so no one stays away from the show for good.

The third season was accused of losing that tight focus and its audience began to dwindle.  In spring 2007, ABC and the producers agreed to an end date for the show, spring 2010, and that freed the producers to finish plotting out the series in broad strokes.  We go the first hint of that in the season finale which had the first flash forward, showing us a suicidal Jack insisting he and Kate have to return to the island.

As a result, we were eager for the fourth season, the six-disc DVD collection, which goes on sale Tuesday and were not disappointed.  The freighter that has arrived proves not to be from Desmond’s beloved Penny but on behalf of Charles Widmore, who seems to be out to control the island and its secrets.  From that point, we delve into sixteen episodes which furthered everyone’s character arcs while introducing new wrinkles and new cast.

As one would expect, Jack and Locke are at odds as Locke’s spiritual side says they have to remain on the island while Jack remains committed to getting everyone off.  The cast splits and we follow both sides with Locke’s crew taking over the compound used by The Others, who have fled.

Meantime, a helicopter brings people from the freighter who spend the season interacting with the castaways in positive and violent ways.  There’s anxious Charlotte Lewis (Rebecca Mader),  weird Miles Straume (Ken Leung), mercenary Martin Keamy (Kevin Durand), scientist Daniel Faraday (Jeremy Davis) and realistic pilot Frank Lapidus (Jeff Fahey).  As people struggle to figure out what are the right actions to take in the present, the flash forwards reveal which six people make it off the island and what happens to them.  Clearly, getting off the island is not an end to their troubles as we see Hurley back in the asylum and Jack an alcoholic like his father.

The single best episode was “The Constant” which involved a unique element to the series while providing additional backstory to both Desmond (Henry Ian Cusick) and Faraday. Boiled down, it’s a romance that neither time nor space can diminish.

In the end, Locke has to save the island as Benjamin Linus, its current caretaker, effectively hands the job over.  To protect it, he has to move it and as we’re teased in the commentary, not only does it physically move in space but apparently also in time setting up new questions for the fifth season, which begins in January.

Lost: The Complete Fourth Season]]] – The Expanded Experience works best when watching the episodes in a single seating or a cluster of episodes because the drama pulls you in and keeps you in place.  Like the best cliffhanger serials of old, you can’t wait to see what happens next.

The extras also give you a greater insight not only into the series, but its performers and creators.  One of the nicest treats is having all the flash forwards edited together in “Curse of the Future” a chronological presentation to better follow each character and their woes away from the island.  We also get the complete set of mobisodes, the short interstitials spotlighting various secondary characters that were first used for cell phones and on line. Two of the best feature Jin on the golf course and Arzt, the teacher.

As expected, there are some nice pieces on the making of the show plus profiles of the new characters.  Two featurettes stand out: one on Michael Giacchino’s haunting score and a live performance of the same by the Honolulu Symphony Pops and the other looking at how difficult it can be for the crew to keep track of which character is using which gun.

There’s a fun mockumentary exploring how conspiracy theorists would look at the Oceanic Six.

Deleted scenes, bloopers, commentary and a few other features round out the 604 minute collection.  Clearly, this is not for beginners but a reward to the faithful.

(Note: we’ll be showing previews of the DVD extras over the next few days here on ComicMix.)